Welcome to the Friday 5ive, a weekly post where I discuss five things that caught my attention this week. I was in Florida for a girls' weekend last week, so this post covers two weeks.

1) I attended the annual ArchCare Gala at Gotham Hall this week, hosted by my husband to benefit the ArchCare Foundation. Along with 500 other people, I saw former NY Yankee Tino Martinez speak a few words. He told a funny story about trying to get Yankees tickets for his former school principal, a nun, and her friends. It was sweet, and anyone who attended Catholic school would appreciate it. The entertainment for the evening was provided by the New York Tenors, who sang three songs and had the audience on their feet. This is a clip of them singing Leonard Cohen's "Hallelujah." 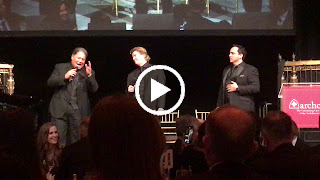 2) I saw a whimsical tea pot display at the Mackenzie Childs store in New York City. Look at the hands coming out of the wall holding the tea pots, so very clever. 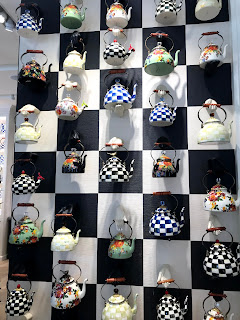 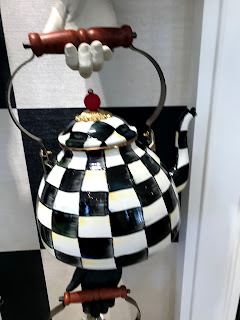 3) This vibrant red sky over the East River greeted me this morning as I got up early to do laundry. 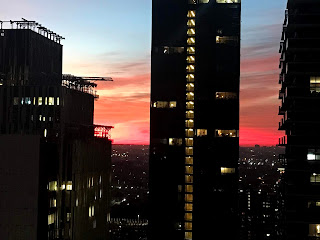 4) I watched the entire season 3 of The Handmaid's Tale last week. I stayed up until 1:30 in the morning to finish the last three episodes, and it was so intense that I could not sleep afterwards. My takeaway- the allusions to the Underground Railroad were terrifying, and those Marthas are badass women. 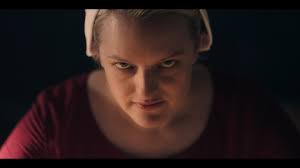 5) It was a week for biographies about famous women. The first one I read is Janis by Holly George- Warren, which tells the entire life story of Janis Joplin, and I found the second half of the book more interesting than the first, after Janis starting becoming famous. She was a blazing talent, an addict, and a lonely woman.  I'll be downloading her music and writing a review of the book soon. 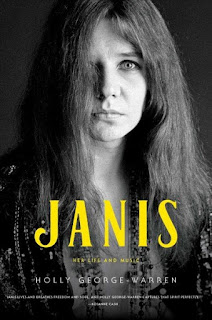 The second biography is also about a cultural icon- Carrie Fisher. Sheila Weller's  Carrie Fisher- A Life on the Edge  fully recounts Fisher's life from her childhood to her death in 2017, when she had a heart attack on a flight from London to Los Angeles. Fisher was bipolar and addicted to drugs. She spoke and wrote candidly about her struggles in both in her fiction and nonfiction books, as well as in her brilliant autobiographical stage piece, Wishful Drinking, which I was lucky enough to see on Broadway. (My blog post about that is here.) It's a compelling book, but Carrie's family has recently disavowed it, saying they did not contribute to it. It does make me want to read all of Carrie Fisher's novels and watch all of her Star Wars movies. My review will be up soon, and the book publishes on November 12th. 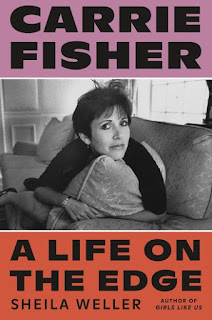 I hope you had a great week too, let me know what you've been up to in comments.

Posted by (Diane) bookchickdi at 3:40 PM