Diamonds Are A Girl's Best Friend by Jenny Colgan 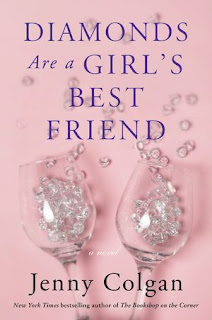 I recently read one of her earlier books, recently republished- Diamonds Are A Girl's Best Friend, which is a little different from her newer books. It's set in London, and the story is a bit rougher-around-the-edges. It's also very funny.

Sophie Chesterton is a gal-about-town, she spends her days shopping and getting her nails done and her nights out on the town with her two best friends and her boyfriend, whom she hopes will pop the question soon.

Life is good for Sophie until it is not. A tragic event forces her to leave her father's mansion and make her own way in the world. She ends up living in an apartment in the dodgy end of town with four young men, who take in her in with the understanding that she will clean their disgusting apartment as part of the rent. One of them even calls her "Cinders", short for Cinderella. (The scenes where she cleans the bathroom may be too much for some germophobes to even read.)

Sophie wants to be a photographer, and she manages to find a job as a photographer's assistant. She knows the photographer as a fashion photographer, who shoots the most glamorous women. On the side, however, he shoots scantily clad women for the tabloids, and the small, shoddy studio where he does this is where Sophie gets a job.

The characters in the book are terrific; the young women who work as tabloid models had me laughing out loud.  The "boys" Sophie live with are interesting- James (the military man), Wolverine (whose name perfectly describes his canine appearance and actions), Cal (who brings home a different woman every night) and Eck (the sensitive artist). Even Sophie's stepmother, who could have been one-dimensional, has more shades to her.

Sophie is the best character however. I love her salty language (you'll learn a lot great British slang in this book), and attitude. She could have just given up, but Sophie pushes on, even in the face of severe embarassment from her former friends.

There is a love triangle here between Sophie and two men, and the ending came as a bit of surprise, but a welcome and logical one at that. If you liked Bridget Jones' Diary, Diamonds Are A Girl's Best Friend is a perfect read for you.

Posted by (Diane) bookchickdi at 3:05 PM