This Beautiful Life by Helen Schulman 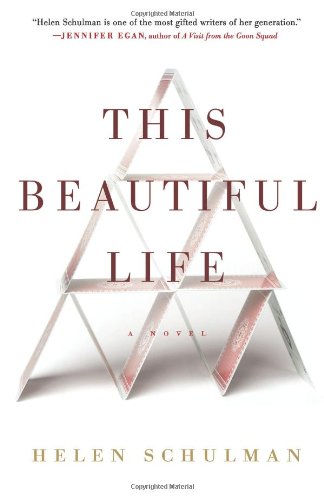 I was able to relate to the characters in Helen Schulman's shattering novel, This Beautiful Life. Liz and Richard Bergamot lived in upstate New York, Ithaca, about 30 minutes from where I lived for 45 years. Richard got a fabulous offer for a job in Manhattan, doing work that he found meaningful and rewarding. The family moved to Manhattan.

Fours years ago, my husband also received a job offer, doing something meaningful and rewarding, and off we went. Unlike Liz and Richard, our children were grown and off to college, so we did not have to uproot them and raise them in Manhattan.

Jake is their 15 year-old-son, who had to leave the suburban beauty of Ithaca and navigate the urban center of Manhattan. Coco, their adopted Chinese daughter, took to Manhattan and all its charms like a duck to water. She was popular with all the "right" girls at school, and got invited to every fancy party.

Liz transitioned from working part-time teaching art at the university in Ithaca to being one of the "ladies who lunch". Richard was consumed by his job, and I loved how Liz described him as "exuding competence. He was a self-cleaning oven. And even after all these years, Liz was not immune to the power of his good looks."

The description of parenting of these children of privilege hits close to home for many parents today.


"they are both too close to their children and too far away from the ground. They are too accomplished. They have accumulated too much. They expect too much. They demand too  much. They even love their kids too much. This love is crippling in its own way."

Jake receives a video from a very young girl he met at a party. It is a pornographic video she made of herself. He doesn't know what to do, and he sends it to his friend to get his opinion. His friend passes it on, and soon it has become viral; the whole world sees it.

The life that the Bergamots have is turned upside down. Jake is suspended from his private school, and he may be prosecuted for distributing child pornography. Richard's boss forces him to lay low from his very public position because the story is all over the tabloids and they can't afford the bad publicity.

Liz withdraws into her own world, refusing to get out bed most days, glued to her laptop computer. She watches the video of the girl endlessly, and that leads her to other pornography that she can't stop watching.

Watching the family fall apart is devastating, and Schulman makes these characters so real that you ache for them. Reading it makes you think "there but for the grace of God and one bad decision go I". As parents we try to teach our children to make good decisions, and we hope that when they eventually do make a bad decision, as they all will, that it is one they can come back from.

But in today's plugged-in world, where the click of a mouse can change one's life, making a bad decision can be life-altering. Jake is a good kid, he never would have sent that video out into the world to hurt the young girl, yet that is what happened and it nearly destroys his family.

I cried a few times reading this novel, no more so than when Jake tells his dad that he screwed up again, and Richard says, "I'm your father. I'm always on your side." This is a good family, and how they try to live with what happened is something every parent can relate to, although we hope to never be tested as the Bergamots were.

This book takes you on an emotional, heart-rending journey, one that will make you think about the fragility of the life you have.