ONE DAY by David Nicholls slowly seduces you 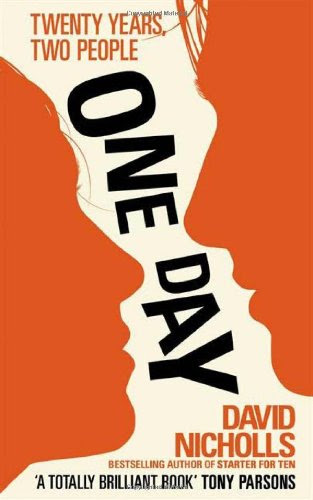 British author David Nicholls' novel One Day begins on July 15, 1988 with two university students in Edinburgh, Dexter and Emma, sharing an evening of drink and sex. Dex is from a wealthy family, Emma is not. Dex is handsome, but not overly ambitious, and Emma, not the type of girl who captures men's attention when she walks in the room, is, as Dex says, "is one of those girls who used 'bourgeois' as a term of abuse".

The novel follows Dex and Emma for the next twenty years on the date of July 15th. We watch as they become good friends, but not more than that, although at certain points in time each fancies the other romantically- just not, it seems, at the same time.

Dex becomes a successful television presenter, making good money, dating lots of hot women, drinking way too much, but it's a shallow life. Emma is less successful personally and professionally. The one constant in their lives is their friendship. When they are together, they become more than the sum of their parts, if only they realized it.

As Dex gets older, his looks fade and he is no longer the 'golden boy'. He marries a wealthy woman, but is he happy? Emma's life gets better after she ends a relationship that is not suited to her. She gets a job as a teacher and works on writing a novel.

Nicholls brilliantly captures these two people, and their relationship is one that will be recognizable to many people. He is not afraid to make Dex downright unlikeable much of time, yet he gets us to root for Dex to be a better man. Our heart breaks for Emma, and we just want to see her get the life and love she deserves.

One Day is the kind of book you don't fall in love with right away; it slowly seduces you until you realize by the end how deeply you have fallen in love with it. Dex and Emma will at times infuriate you, make you laugh and break your heart, but you will not forget them, nor will you forget the heartrending end of this near perfect novel.

One of the oldest stories ever told, that of Adam and Eve, gets a unique remake of sorts in Sena Jeter Naslund's Adam & Eve.

Lucy is in Amsterdam for a scientific conference with her husband Thom, an astrophysicist of renown, who tells Lucy that he has proof of extraterrestrial life. He gives Lucy a memory stick that contains all of his evidence.

Thom is killed by a falling piano, and Lucy is devastated. Still grieving her loss three years later, Lucy is invited to welcome scientists to a conference in Cairo. It is too much for her, and she breaks down on stage.

She meets a young woman who takes Lucy to her father, a scientist Lucy met at the conference. They convince Lucy to smuggle something out of Egypt for them- an alternate version of the book of Genesis that they have found buried.

There are fundamentalist Christians, Muslim extremists and literalist Jews who have banded together to stop anyone from finding out about this discovery, even willing to kill to prevent the world from reading this other Genesis.

Lucy agrees to fly a plane to France with the scripture, but her plane crashes and she is discovered by Adam, a young soldier who was kidnapped and assaulted by soldiers. Adam believes that Lucy is his Eve and that they are living in the Garden of Eden.

This is a big book, full of so many themes it can make your head spin. Lucy and Adam's life in Eden parallels the Biblical story, particularly when another soldier lands in their garden. His presence dramatically changes the dynamic of the Garden. Is he the embodiment of the devilish snake from Genesis?

The violence that is an everyday part of life in the Middle East is explored as a root cause of the rise of  dangerous religious fundamentalism. Throw in the possibility of life on other planets and the fear of that knowledge endangering religious doctrine. Add in the discovery of very early human drawings in caves in France and you've got a lot to think about.

Naslund has packed a lot of ideas into 350 pages, and her characters are well-drawn and interesting. Lucy and Adam's life in the garden is fascinating, and thriller fans will be rewarded with an action-packed sequence that resolves the story. Adam & Eve is the thinking person's answer to The DaVinci Code.

Posted by (Diane) bookchickdi at 3:20 PM No comments: