If you still have turkey leftover from Thanksgiving, try using it in this recipe from Giada De Laurentiis.
I made it using rotisserie chicken a few weeks ago, but it would taste just as good with turkey.
This recipe came from the Food Network website:

2 cooked chicken breasts, cubed (about 2 cups) or use leftover turkey

Preheat the oven to 375 degrees F.

Bring a small pot of salted water to a boil over high heat. Add the orzo and cook until tender but still firm to the bite, stirring occasionally, about 8 to 10 minutes. Drain pasta.

In a large bowl combine the eggs, ricotta, and creme fraiche and stir until the eggs are beaten and the ingredients are combined. Add the cooked orzo, chicken, scallions, parsley, red bell peppers, salt, and pepper. Stir to combine.

Pour the mixture into a 1 1/2-quart baking dish. Bake for 25 minutes. Turn on the broiler. Place the pan under the broiler until golden on top, about 5 minutes. Remove from the oven and let set for 5 minutes. Cut into wedges and serve with a side salad.

I would add a little more sea salt and pepper, I felt it lacked a little seasoning. I baked a loaf of Trader Joe's Pumpkin Bread (from a mix- so good!), added a salad and dinner was ready. My husband pronounced it a keeper. 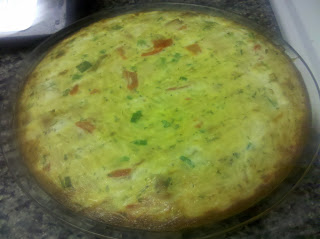 I had heard good things about this book, but wasn't sure I'd be interested in the coming-of-age story of straight edge teens in the late 1980s New York City. Boy, was I wrong.

Henderson has such compassion for her characters- Jude, the drug-using boy in love with a girl who slept with his best friend Teddy, Eliza, the lost rich girl with a secret, Johnny, Teddy's straight edge musician brother hiding from himself- that you feel like you know these people and care deeply about what happens to them. Even Teddy, who only exists for 72 pages yet whose presence influences all of the main characters, is so vivid, I felt I knew him well.

The minor characters are well drawn too; I particularly liked Jude's estranged father who left his family behind years ago, and although he faithfully sent support checks, checked out of his son and daughter's emotional life. Henderson has created this world that I had no idea about, the straight edge world of young people living in poverty on the Lower East Side of New York City in the late 1980s. It was a much different world there than it is today. They live with the homeless, violence and drug dealers in Tompkins Park, and with the fear and ignorance spawned by the AIDS epidemic.

There is one scene, a fight scene, that echoes S.E. Hinton's classic book, "The Outsiders", and I loved her homage to that story about teens also on the outside of mainstream society. (One of the characters even mentions the book later in the story.) This book will appeal to all of us who grew up loving "The Outsiders".

Part of the story takes place in Vermont, and Henderson creates that world with as much care. I felt like I was dropped into this story, these worlds that I knew little about. Great fiction can open up your mind and heart to characters and new ideas, and "Ten Thousand Saints" is great fiction. It is one of the best books I have read this year, and I can't wait for more from Eleanor Henderson.

I read this book in two sittings, I just couldn't put it down. These characters manage to crawl inside your heart, and when they make bad decisions and mess things up, you just want to hug them and tell them it will be alright.

The characters in Girls in White Dresses are women on the verge of marriage. We meet Lauren, Mary and Isabella at college, and follow them through various vignettes as they meet and date guys- some good, some bad- on their way to adulthood and eventually, marriage and motherhood.

Their stories are told in alternating chapters, snapshots of their lives. Mary is a serious law student who, for some reason unbeknownst to her friends, only dates ugly guys. She graduates and works many hours at her job, crushing on her boss.

Isabella is the baby of her family, looking for a job in publishing and a good guy to love. She has several semiserious relationships, but none that seem to give her what she wants. Is it her?

This book can be a bit of a downer. We see all of these women at their most vulnerable, emotional time in their 20s, when they are out in the cold world, trying to find a career, trying to find love. They work at lousy jobs, have tiny city apartments, and kiss a lot of frogs looking for a prince. They see their friends getting married, (one hilarious chapter deals with the many, many bridal showers they have to attend as bridesmaids for one of their friend's weddings) getting great jobs, moving to the suburbs, having children, and their journey to the same life seems fraught with trouble. One thing that sustains them is their friendship with each other.

At times there seemed to be too many extraneous characters, but when the author focused on her main characters, I felt compelled to keep turning the pages. Close really nails the confusion of young women, and most women who read this will identify with their lives, even if their 20s are in the rear view mirror.

Posted by (Diane) bookchickdi at 10:16 AM No comments:

It's been a long time since my sister-in-law Brigette came for a fun day in NYC. She is a big foodie and a fantastic cook, so I knew I could entice her to come when I got tickets to a taping of ABC's new talk show The Chew, with two of her favorite chefs, Mario Batali and Michael Symon.

The taping stars at 9am, so we had to be at the studio on 67th St. and Columbus Ave. at 7:30am. We were hoping for a good giveaway, and since it was publication day for Mario Batali's new cookbook, Molto Batali, we walked away with a free copy.

The show was fun, with host Clinton Kelly and executive producer Gordon Elliot putting on quite a show with their dance moves to 'bad 70's songs'.  Former Top Chef contestant Carla Hall, also a host on the show, showed off some goofy dance moves too.

On our way out, Brigette got to meet Michael Symon and tell him that her husband is a long-suffering Cleveland Browns fan too.

The Live with Regis & Kelly set is right down the street, and they were looking for new audience members for their Eddie Murphy interview. I've been to Regis before when Bette Midler co-hosted with Kelly, but seeing Regis on his TV show is on my Bucket List, so I got to cross that off when we got in to see this. It was pretty cool to see Eddie Murphy too, he is one snappy dresser.

After that, we raced to get downtown to meet Josh from Sidewalk Tours of NY. The traffic was bad, and there are all kinds of security barricades up down there, so we got there in the nick of time. Josh was a great tour guide, and we only had two other people in our group, Tom & Diane, a married couple from New Jersey who were very nice.

Josh gave us a little history of the area, and then we visited five Food Trucks. There are a bunch of Food Trucks that park near Hanover Square and serve lunch to the hungry hordes of workers in the Financial District near Battery Park.

At the first truck we ate Korean tacos from Big D's Grub Truck. I had never had a Korean taco, and it was really tasty, with the crunch of cucumber and the heat of the spices adding a unique dimension.

Next we had souvlaki on a stick at Souvlaki GR, winner of Rookie of the Year last year at the Vendy Awards, and this year taking home the Customer Favorite award. We had the pork souvlaki, and it came with two small pita triangles and a tangy yogurt sauce. The pork just melted in your mouth, it was so tender.

We headed down the street to Jiannetto's for a grandma slice of authentic NYC pizza. The sauce was just perfect, as was the melted mozzarella and basil.

Our fourth stop was San Luis Tacos, which featured Mexican and Equidorian food. We tasted something like a quesadilla, with chicken, cheese and sauce that was heavenly, and my favorite of the day.

We finished with a mini Rocky Road cupcake from the Cupcake Crew, and it was one of the best cupcakes I have had in NYC, second only to Two Little Red Hens.

If you come to NYC and love to eat, check out the Sidewalk Tours of NYC. They have several different ones from which to choose. It was so much fun, and a great chance to try different foods. You'll never look at the food trucks in the same way. (Food Network also has a cool show called The Great Food Truck Race that features gourmet trucks like these)

We ended the day at Eataly, the new Italian marketplace near Madison Square Park. It is owned by Mario Batali, Lidia Bastianich and her son, Joseph. I had been there before, but never eaten at any of the restaurants. I had the best pasta I have ever had anywhere; it was a spinach ravioli, with a lemon butter sauce topped with pistachios. Brigette has been to Italy, and says that this pasta dish rivaled the pasta from Italy.

It's a wonderful place to shop for Italian specialty groceries, and the gelato is melt-in-your-mouth delicious. This is a place you want to be able to spend a few hours in.

And so ended our Foodie Day, with full stomachs and aching feet.