The Most Compelling Reads of 2015

My annual end of the year column from the Citizen:
This is the time of year when many publications create their "Best Books of 2015" lists.
Each year I compile my annual list of "The Most Compelling Books I Read This Year." These are books that I read this year, though not necessarily published in 2015. They are books that made me think of them long after I finished reading them, books that deeply affected me in some way or another.
Lauren Groff’s “Fates and Furies” has made many best-of lists this year and deservedly so. She tells the story of a marriage between Lotto, a golden boy, successful playwright and his enigmatic wife, Mathilde. We see their story first from Lotto’s point of view, and then from Mathilde’s, which is dramatically different.
Wendy Francis’ “The Summer of Good Intentions” is a fantastic family story, with the relationship among the three sisters particularly strong and relatable. They face a family crisis with their aging father and it is a heartrending novel. (My full review here.)
Sara Gruen’s “At The Water’s Edge” takes us to World War II Scotland as three people go in search of the Loch Ness monster. The woman of the group struggles to comprehend her husband’s increasingly abusive behavior and learns to find her voice as this intense story builds. (My full review here.)

Victoria Hislop’s “The Sunrise” has a real sense of time and place as this story of a young couple in Cyprus in 1972 who see their dreams of owning an upscale hotel fall apart during the Turkish-Greek war. This wonderful novel resonates today with the refugee crisis and war in Syria taking center stage in the world.  (My full review here.)

Richard Flanagan’s “The Narrow Road to the Deep North” is the story of an Australian doctor in a Japanese POW camp during WWII. It is harrowing and gut-wrenching and not for the faint of heart, but this is the most powerful book I read this year. It also won the Man Booker Prize in 2014. (My full review here.)

Anne Tyler says that “A Spool of Blue Thread” may be her last novel, and if that is true, she is going out on a high note. She is a master of family stories, and this is no exception. We see a family in Baltimore struggle with aging parents, a prodigal son returning home, and a tragedy halfway through the story that changes everything. (My full review here.)

On a lighter note, Patricia Park’s “Re Jane” is a spin on “Jane Eyre” telling the story of a young Korean/American woman who longs to leave her uncle’s home in Queens and escapes by becoming a nanny for a Brooklyn family. When she falls in love with the husband, she runs away to her mother’s family in South Korea. Park immerses us in these disparate cultures to great affect. (My full review here.)

Moving on to non-fiction, Kate Mulgrew’s memoir “Born With Teeth” made many best-of lists as well. Mulgrew is an actress best known for her roles on the soap opera “Ryan’s Hope” in the 1970s, as a Starfleet commander in “Star Trek: Voyager” in the 1990s and now as prison inmate Red in “Orange is the New Black.” Her memoir is nothing like the usual star-turn, but an honest look at what it meant to be an actress and the sacrifices she made to get there. (My full review here.)

Advertisement (1 of 1): 0:25
Comedian Jen Kirkman’s “I Know What I’m Doing — and Other Lies I Tell Myself” is not a laugh-a-minute book, but rather a candid look at her life as she nears 40 and finds that she wants out of her less-than-two-year marriage. I didn’t know much about Kirkman, but I really appreciated her honesty about where she is in life.

“The Short and Tragic Life of Robert Peace” tells of Jeff Hobbs’ quest to learn what happened to his friend from college. Peace was a young black man who grew up in Newark, New Jersey, the son of hard-working blue-collar worker who sacrificed so her son could go to a good private school and on to college and a drug-dealer who was convicted of murder. Peace was torn between these two worlds and this is an eye-opening book, a must-read for everyone. (My full review here.)

Mary Pflum Peterson’s “White Dresses” relates the story of her mother, a woman who became a hoarder. Peterson shows us with great compassion how a devout young Catholic woman who left the convent after nearly dying and married a closeted gay man with whom she had two children, descended into this mental illness of hoarding. (My full review here.)

I hope you read many great books this year, and will read many more in 2016.

Labels: Most Compelling Reads of 2015, the Citizen

New in Paperback- The Precious One by Marisa de los Santos 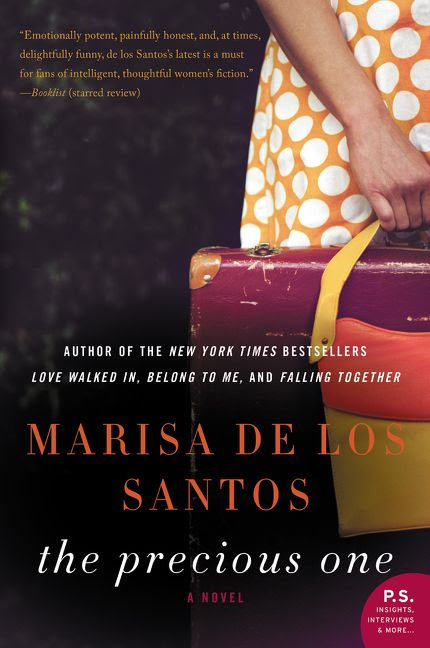 As Marisa de los Santos' The Precious One opens, Taisy Cleary receives a phone out of the blue from her estranged father Wilson, the man who left her mother, twin brother Marcus and her to marry a young sculptor. After not hearing from the man in ages, he calls her to inform her that he had a heart attack two weeks ago and summons her to his home to discuss an important matter.
Marcus tells Taisy she is crazy to go see the man, but Taisy cannot say no. When she arrives, she finds that her father- a brilliant professor, inventor and self-made millionaire- wants her to help him write his memoir. Or rather, he will dictate it to Taisy and she can interview the many people who think he is brilliant too.

Taisy says yes, even though she has to stay in the poolhouse. (You wouldn't expect her to be allowed to stay in her father's house with his wife and brilliant and beautiful golden child Willow, would you?)

The only thing Willow knows about her half sister is that Taisy committed some horrible act when she was a teenager that made Wilson infuriated and lose all respect for her. Now Taisy is in their lives and Willow feels she must protect her father from her.

The story is told from the alternating perspectives of Taisy and Willow. Taisy is curious about her father and his other family and slowly comes to care for Willow and her mother. Willow has been isolated from most other people, being homeschooled and smothered by her father's attention.

As Taisy and Willow get to know each other, they come to understand and even like each other. Taisy helps Willow join the outside world, teaching her the things she needs to know.

As I read this book, I felt like Taisy could be a character in an Adriana Trigiani novel. She is a hardworking woman with a good sense of humor, and an even more developed sense of right and wrong.  There's even a crazy family dinner scene that reminded me of the Roncalli family ones from Trigiani's Valentine series.

The ladies in the book club all agreed that we liked Taisy, she might even make a great addition to our book club. Her growing affection for Willow and Willow's mother was touching and sweet. One of our members has twins, so she especially enjoyed the relationship between Taisy and Marcus.

We did not like Wilson, he was pompous and self-righteous, although Taisy's discovery of his past helped to mitigate that feeling somewhat (OK, just a little bit).

This was the first book I have read of de los Santos, and I would like to read more of them. I like her style of writing, and the way she was able to write in the voices of two distinct characters.

If you're looking for a good family story, The Precious One is an excellent choice.