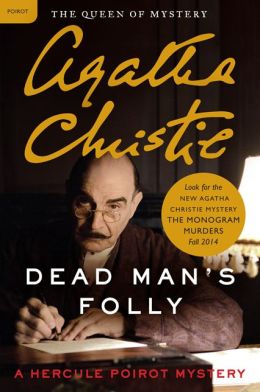 This has been declared The Summer of Agatha Christie by bookclubgirl.com, and after reading book number one- And Then There Were None- the next book on our list is Dead Man's Folly, a Hercule Poirot Mystery. All this leads up to the new Hercule Poirot mystery, The Monogram Murders, publishing in October.

Dead Man's Folly was also televised last night on PBS' Mystery! series, and it was great fun to see the characters come to life on screen after reading the novel. Actor David Suchet is the embodiment of Hercule Poirot; his penguin-like walk had me smiling when he first came on screen.

Poirot is summoned to an English estate by eccentric mystery writer Ariadne Oliver. I suspect that Agatha Christie had a good chuckle creating an older, female British mystery writer and giving her exaggerated characteristics.

Oliver created a Murder Hunt for a fete hosted by Sir George Stubbs, the wealthy owner of an estate. (Anyone who watched PBS' Downton Abbey may recall that Lord Grantham's family hosted a similar carnival-like event on their estate.)

There were games, food, a tea tent, even a fortune teller. Oliver feared that the Murder Hunt game she created would lead to an actual murder, which was why she summoned Poirot. Of course, a murder does occur, and it is up to Poirot to assist the local constable in discovering the culprit.

Naturally, there are several suspects, including Sir Stubbs, his overly-loyal secretary, the Legges (a young couple hiding something), an older woman who had to sell the estate to Stubbs to pay death duties, and an architect with an attitude problem. When Lady Stubbs' wayward cousin shows up, he becomes a prime suspect.

The fete scene is my favorite, both in the book and on screen. The book gives you a full picture of the scene, and as a reader you feel like you are there enjoying the day.

Poirot is a fabulous character; from the way he answers the telephone ("Hercule Poirot speaks") to telling Mrs. Oliver that she does not "derange him in the least" (meaning she is not bothering him), these are things I would like to incorporate in my daily speech.

Christie gives the reader a clear physical picture of characters; Mrs. Masterton is said to look like a bloodhound, and Captain Warburton is "horsy".  The manner in which the characters speak of each other fascinated me as well. Lady Stubbs is called "feeble-minded' and worse by many characters, and the awful manner in which the police and doctor talked about the young fourteen-year-old female victim spoke volumes about the way in which men looked upon poor, unattractive women.

Although in many instances women were looked down upon or treated as inferior, there is a sentence I liked that that spoke positively about women. When things needed to be accomplished for the fete, the men drifted away and "the women, as women do, worked energetically and conscientiously." I think we've all seen that before.

I was surprised by the unveiling of the culprit. I tip my hat to Hercule Poirot because, while I figured some things thanks to clues dropped, I did not have any idea who actually did it. I'm looking forward to book number three- After the Funeral.

Pop over to bookclubgirl to join in the fun.

rating 4 of 5 stars
My review of And Then There Were None is here.