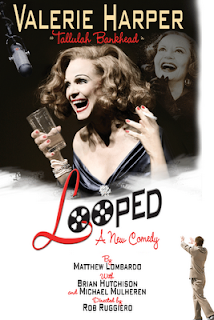 Long before anyone ever heard of Lindsay Lohan, there was Tallulah Bankhead. Bankhead was a rowdy, bawdy actress who worked on stage, screen and television from the 1920s through her last role in the camp TV show Batman.

Bankhead loved her drink, took pills, partied all night and cursed like a sailor. One of her last films was 1965's Die! Die! My Darling, which was an ironic name for a film starring Tallulah Bankhead since she called everyone she met "Dahling'".

To complete the film, Bankhead to attend a looping session, where she would go to a recording studio and 'loop' dialogue, that is record dialogue for the film that for some reason or another did not sound right on the film soundtrack.

That disastrous recording session was itself being recorded and became the basis for the stage show, Looped, written by Matthew Lombardo and starring Valerie Harper, best known as TV's "Rhoda" from The Mary Tyler Moore Show, now on Broadway.

Harper is the perfect Bankhead from the moment she barrels through the studio door, hours late and a little tipsy. Brian Hutchison plays the hapless film editor who has the misfortune of being the one left behind to shepherd Bankhead through what should be a few minute project, looping one line of dialogue, but thanks to Bankhead, it turns into a day-long process.

Harper captures the bigger-than-life essence of Bankhead, the party girl who is getting too old for this stuff, yet she carries on. Hutchison's performance of Danny, the exasperated editor who seems melancholy, is full of facial tics. I saw Hutchison in last year's Exit the King, where he was the dim palace guard, and he used the same facial tics to excellent advantage for that role. In this role, however, it seemed a bit off-putting. The only other character in the play is a sound engineer played by Michael Mulhern to good comic effect.

The first act is mostly comedic, filled with the great one-liners Tallulah Bankhead was famous for. When asked why she called everyone 'Dahling', she said "because all my life I've been bad at remembering people's names. Once I introduced a friend of mine as 'Martini'. Her name was actually 'Olive'." Another is "Cocaine isn't habit forming; I should know, I've been using it for years!"

While the first act is very funny, the second act is more emotional and better. The audience finds out why Danny is so sad, and Tallulah becomes a more realized, fully dimensional character.

I wouldn't pay full price for Looped, but if you get discount tickets at TKTS, Playbill.com or Theatermania.com, I would recommend the show. Harper is absolutely fantastic, and she brings Tallulah Bankhead to glorious life on stage.