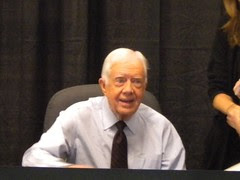 Met President jimmy Carter at a book signing yesterday. He signs books faster than anyone I have ever seen! It was an honor to meet him.
Originally uploaded by bookchickdi
I had the honor of meeting President Jimmy Carter at his book signing for White House Diary at Barnes & Noble Lincoln Triangle store in NYC on September 20th.

It was a good crowd, and my line mates were an interesting group, we shared a lively conversation. (Which was good because we were together for over two hours.)

They are always well organized at Barnes & Noble, and this was no exception. I had heard from others who had been to one of his signings before that President Carter was a fast signer, and boy was he. You barely had time to say hello to him as he signed our books, and you were off. There was an area set up for photos which was nice, some people do not allow photos.

This book looks very intriguing; if you saw the 60 Minutes interview, you know what I'm talking about.
Posted by (Diane) bookchickdi at 3:35 PM