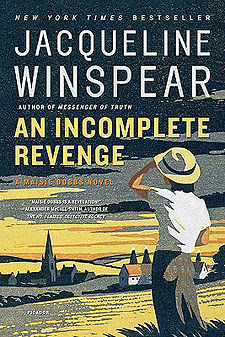 An Incomplete Revenge is the fifth book in the Maisie Dobbs series by Jacqueline Winspear. I read it for bookclubgirl's Mad About Maisie Readalong, which I have been thoroughly enjoying.
After what I found to be my least favorite of the series, Messenger of Truth, An Incomplete Revenge seems to have Maisie back on track. We learn a few interesting things about Maisie, including the fact that her grandmother is a gypsy. This may explain Maisie's proficiency at 'reading' people and situations as well as she does. In addition to her training with Dr. Blanche, she also has a natural intuition.

I thought that perhaps after Maisie's introspection at the end of the last novel, we'd see more of her personal life, more of her opening up to new things. Other than her weaving class that she attends at the beginning of the story, and her dancing alone in her apartment at the end, we really don't see her 'let loose'.

A part of Maisie's life does come to a conclusion as Simon, her first and only love who was severely injured in an explosion during WWI, finally succumbs to death. Maisie has her best friend Priscilla at her side, thankfully, and she finally gets closer to Simon's mother.

Maisie also comes to a reconciliation with her mentor Dr. Blanche, and her relationship with her father seems to be back on track.

The mystery involves a town with a wealthy bully and a long-held secret about the tragic deaths of Dutch family during WWI, which Winspear gives enough of a hint that a careful reader can figure out, and a surprise twist about a hidden identity. Fans of mysteries should be very satisfied with this story.

An interesting new character is introduced in the form of Beattie Drummond, a female reporter who is looking to make a name for herself and ends up helping Maisie. Her line about the vicar's duties- 'hatch (baptism), match (marriage) and dispatch (funerals) had me laughing out loud. She and Maisie are both in male-centered professions, and I think that if Billy and his family ever move to Canada, Beattie would make a good assistant for Maisie. I see a lot of potential in this relationship.

I enjoyed reading about the gypsy family, and learning about their culture. One of the best things about the Maisie book is learning about the historical context of this era. It's interesting to compare the strong feeling of fear and hatred that people who are different from the majority back then (gypsies and the Dutch family) and today (Muslims), and what those feelings can cause a mob mentality to do.


A strong entry in the Maisie series; on to Among the Mad next.

Posted by (Diane) bookchickdi at 4:43 PM