Rob Lowe's Stories I Only Tell My Friends 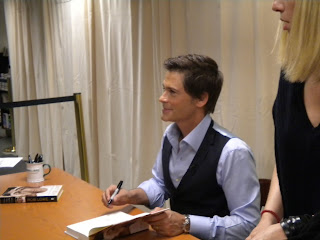 I met Rob Lowe at a book signing at Barnes & Noble, and he is very handsome- and very tan. He was engaging to everyone, even the woman in line who was a little stalker-ish and had to be gently nudged away from the table by security.

I told him that my son and his friend became interested in politics thanks to his Sam Seaborn character on TV's The West Wing, but when I lamented that my son is a Republican, Lowe laughed and said "We need them too!"

The book is a fast read, and Lowe drops names likes he's carrying them in overflowing wheelbarrow. He's kind of like a Hollywood Forrest Gump, meeting famous people at every turn, starting when he was eight-years-old and talked his way into Liza Minnelli's dressing room at a theater in his hometown in Ohio. It's a charming story, and foreshadowing of more famous meetings  to come.

His mother moves the family to California, and he ends living near the Sheen family. He and his brother Chad hang out with Charlie Sheen and Emilio Estevez, and become best friends, often going on auditions together. (There's a great picture of Lowe and Martin Sheen in the book from this era.)

The most interesting part of the book recounts Lowe's experience auditioning for and getting a big part in Francis Ford Coppola's movie The Outsiders. The cast of the movie included Estevez, Tom Cruise, Ralph Macchio, C. Thomas Howell, Matt Dillon and Patrick Swayze. This movie was the stepping stone for most of these actors' careers, but Lowe was devastated when his role was severely diminished in the final cut.

His recollections of these guys and that movie is fascinating, especially for people my age who loved the book and movie. Cruise is driven and focused, Dillon is a laid-back ladies man, and Swayze could do anything and everything (ballet, gymnastics, carpentry, horseback riding, motocross and of course, dancing) superbly.

Fans of The West Wing will be disappointed that he devotes only one small chapter to that time. He left after four years, and it wasn't on the best of terms. It appears that he was isolated from the rest of the cast, most of whom were relatively unknown (except Martin Sheen).

Lowe dated many women (including Demi Moore, Melissa Gilbert and a whirlwind romance with Princess Stephanie of Monaco). One funny anecdote has Robert Wagner saying to Prince Rainer, Cary Grant and Gregory Peck "Ya know, guys, I think that kid's banged every one of our daughters." Funny, RJ, and probably true.

Lowe struggled with fame, with the difficulties of being the It-Boy, then making bad career choices, the sex scandal with an underage girl when he was 22, and eventually alcoholism. When he decided he wanted to get sober, he went to a serious rehab and did it. (He's been sober for over 20 years).

He eventually finds true love with Sheryl, a makeup artist he meets on a movie set. He recounts their courtship and his declaration of his love for his wife of 20 years is so moving.


"And in the most surprising fact of my life, one that at one point I thought I was incapable of feeling and unworthy of achieving: I am still in love with my wife. After almost twenty years of marriage, I look at her face and see her radiant light; I hold her and feel our hard-earned and sometimes difficult history passing between us, enveloping us in a urea of comfort, gratitude, and profound attraction."

Lowe's book reminds me of Cloris Leachman's autobiography, Cloris. She knew and worked with everybody, including her good friend Marlon Brando.  Like Leachman, Lowe presents a snapshot of Hollywood during a certain time period, and he is a good writer. If you grew up in the 1970s and 80s, this book will bring back memories.