Today began Broadway at Bryant Park, a summer series that offers free performances from Broadway and off-Broadway musicals every Thursday during July and August.

It's always a good time and this season's first show featured performances from Sister Act: The Musical, Baby, It's You, STOMP and an introduction from Cirque du Soleil's Zarkana.


I got a front row seat, but boy was it hot. I'm glad I picked up a bottle of Vitamin Water and the complimentary Bank of America fans were in heavy use by the audience.

The colorful characters from Zarkana wandered through the crowd 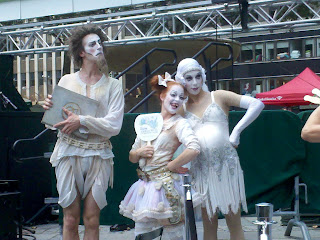 The show began with performers from Baby, It's You, a jukebox musical about the life of Florence Greenberg, the founder of the Shirelles girl group. I saw that show and enjoyed it; my review is here. The "Shirelles" sang a medley of hits including Soldier Boy and Mama Said. 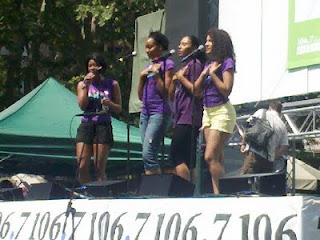 Next up, the wonderful Geno Henderson as "Curtis Jackson" sang You're So Fine, the group ended with a rousing rendition of Rockin' Robin that had the crowd clapping. 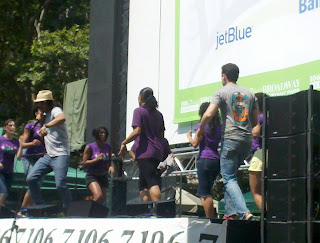 The guys and gals from STOMP always put on a fabulous show, and this year was no different. They really get the audience involved, and when they bring out a little guy banging on a mini garbage can, the crowd loves it. 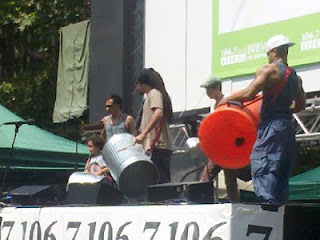 Sister Act  closed out the show with the gangster's henchmen (Caesar Samayoa, John Treacy Egan, and Desmond Green) singing their humorous song, Haven't Got a Prayer. 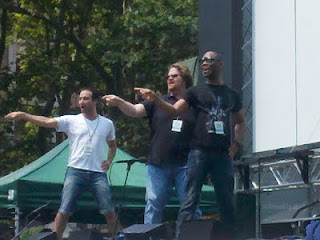 Next up, "Delores VanCartier" and the girls sang I'm Fabulous.  I was bummed that Tony nominated Patina Miller did not perform as Delores, but understudy Rashidra Scott really belted it out. 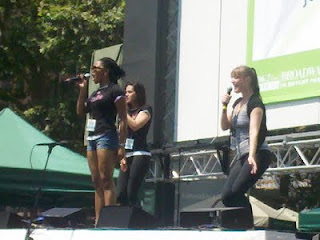 The last song was the showstopper, Take Me to Heaven, sung by Delores and the nuns. I saw Sister Act with my husband, brother-in-law and his wife and we all loved it. The music has a lot of 70's Motown and disco style songs and if you are in NYC, it's a good show that all will enjoy. 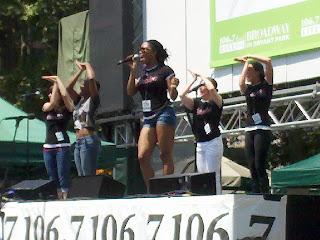