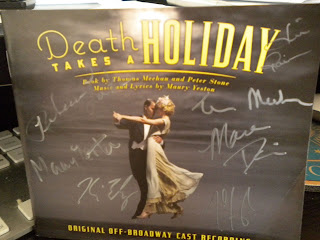 I'm really sorry that I didn't get to see the Roundabout Theatre Company's Off-Broadway production of Death Takes a Holiday, particularly after being treated to a performance of seven (!) songs from the cast recording, now out on CD.

Barnes & Noble 86th St. store in NYC has become the place to see and hear Broadway's best, and that makes me very happy, as I live just a few blocks away.

Maury Weston, who wrote the music and lyrics and is a Broadway vet (Nine, Titanic- both of which won the Tony for best score and best musical) and Thomas Meehan, who wrote the book for Annie, The Producers and  co-wrote Hairspray,  were in attendance as well. Weston introduced the songs and the cast, giving the story behind each of the songs. This was very helpful for those few of us in the audience who did not see the now-closed show.

Kevin Earley played Death, disguised as Prince Sirki, and he has such a powerful voice, on fine display as he sang "Centuries". His lovely co-star Jill Paice played his love interest Grazia, and she showed off her gorgeous voice on "How Will I Know".

Earley returned with Mara Davi as they sang a saucy "Shimmy Like They Do In Paree", which brought a little levity to the performance.


Matt Cavenaugh performed "Roberto's Eyes", which told the story of his friend dying in battle in WWI. Rebecca Luker, one of Broadway' best singers played Roberto's mother, and her tender rendition of "Losing Roberto" was very moving, especially for any mother in attendance.

Earley returned for "I Thought That I Could Live" and the final song was an amazing duet from Earley and Pace on "More and More".

This was one of the best cast performances I have seen, not only did they sing seven songs, but every single performer was wonderful. They really gave the audience a true representation of the entire show, one I wish I hadn't missed. The CD itself is beautifully packaged, too with stunning photos.

Posted by (Diane) bookchickdi at 1:33 PM