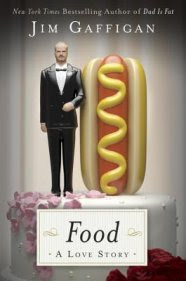 Jim Gaffigan is a well known stand-up comedian and actor whose biggest claim to fame is his "Hot Pockets" routine about the frozen food item eaten mostly by drunk college students and/or lazy people with a microwave.

He has written two books, Dad Is Fat, about living with his wife and five young children in a one-bedroom New York City fifth-floor walkup, and his second is Food: A Love Story, about his love affair with food.

As a stand-up comic who has traveled all over the world, Gaffigan has eaten in many restaurants. When he travels on tour, he tweets to his fans, asking them where and what he should eat. This section of the book is terrific, and in addition to being very funny, it includes wonderful tips for traveling "foodies" (a term Gaffigan disdains).

He is not a big fan of seafood, especially shellfish, saving particular distaste for oysters. His discussion of barbeque, which is used as "a verb, noun, and adjective and even a potato chip" is funny and informative.

Gaffigan recounts how each city is proud of its own unique recipe for barbeque, and that in every Southern city he meets the same guy who says the same thing "Obama ate there, and you can get it shipped anywhere you want." He also mentions places that you can get great BBQ not in the South, with Syracuse, NY (Dinosaur BBQ) on that short list.

He tells a funny story about dragging his family to a gas station in Kansas City, MO to eat at Oklahoma's Joe's, where Gaffigan joined a very long line at 11am. The line was filled with "predominantly, pudgy, balding, exhausted men in their thirties and forties," all happy to be there, though if these same men were confronted with such a long line at a grocery store to get milk or diapers, they would leave the store rather than wait for such unimportant items for their family.

Another hilarious story had him following a man in Kmart, who was drinking gravy from a styrofoam cup he got in the KFC located in Kmart.  His description of the ambience of Kmart as a store that always looks like "it was just attacked by a flash mob" brought a chuckle of recognition.

Food: A Love Story, had me laughing all the way through it, and as I was reading in on the treadmill (Gaffigan would disapprove of this- exercise, I mean), my fellow exercisers would look at me as if I was a little crazy. (Note: laughing while reading on a treadmill can be dangerous. If you get doubled up with laughter, you can potentially fall. Not that that almost happened to me.)

Serious foodies may take offense, but Gaffigan is a comedian who has found his niche in poking fun of his eating habits, and most of us can find something to relate to in this humorous book. He also loves his family (I adored his section about taking each child individually to his favorite deli, Katz's), and I got some great ideas on where to eat. (And anyone who believes that Shake Shack has the best burgers in world is my kinda guy.)

If you need a good laugh, and like to eat, (which is, like, everybody) Food: A Love Story, is for you.

In my Reading Challenge for 2015, Food: A Love Story fulfills my Funny Book selection.