The Whites by Richard Price 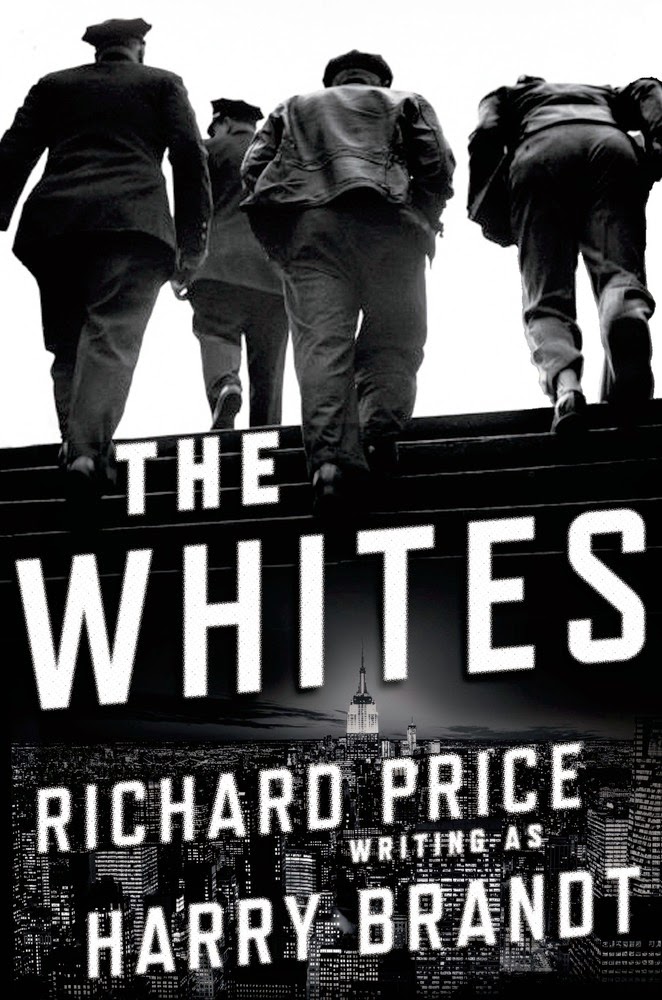 Reprinted from the Citizen
Last month I binge-watched “The Wire,” the HBO series that many people consider the greatest TV drama ever. After I finished the five fantastic seasons, I discovered that Richard Price, the novelist who wrote for the show, had a new crime novel publishing in March.
He wrote “The Whites” under the pseudonym Harry Brandt. Many famous writers write under pen names — Stephen King (Richard Bachman), Ruth Rendell (Barbara Vine) and Nora Roberts (J.D. Robb) among them. Price did it because he said he wanted to write a story different than what he usually writes.
The first thing you notice about “The Whites” is the striking cover. It is stark black and white, with four cops walking up steps, and under them is the skyline of New York City. The type is raised, giving it a rich feel, something not usually seen in crime novels.
“The Whites” is a literary reference to Moby-Dick, the great white whale that destroyed Captain Ahab’s ship and took off his leg. Ahab vows revenge, no matter what the price.
The whites in this story refer to criminals who got away with heinous crimes years ago. When Sgt. Billy Graves, who commands the Manhattan Night Watch detective unit that investigates overnight crimes then hands them off to the unit detectives in the morning, comes upon the murder of a man who was one of his old unit’s “whites,” it brings back bad memories.
Back in the 1990s, Graves was part of “The Wild Geese,” a tough anti-crime unit consisting of four cops: Billy; Yasmeen, the only woman in the unit, now head of security at a local college; Pavlicek, retired, who now owns apartment buildings; and Redman, who owns a funeral home.
Graves accidentally shot and killed a 10-year-old boy while trying to arrest a crazed drug addict, and the fallout from that created a media circus, complete with protests outside his home; that cost him his marriage and put his career in the dead zone, going from one lousy posting to another.
Graves is now married to a nurse, who has some sort of emotional/depression problems, and they have two rambunctious young sons. He does his best to be a good dad and husband, but he feels there is something behind his wife’s problems that he can’t get to.
When another of the Wild Geese’s four whales is killed, and then a third is seriously wounded, Graves becomes convinced something is going on with the members of his old unit.
But how does he get to the bottom of it without questioning his old partners? After all, they all stuck by him following the shooting, and when his wife was hospitalized with a nervous breakdown, they helped care for his sons.
A reporter from a local newspaper claimed she had information that Graves was high on cocaine when he shot the young boy, but she lost her job when her information was determined to be incorrect.
The reporter, who now writes a sex column for an online magazine and works as a private investigator, calls Graves to tell him she has some information he may might want about the shooting he is investigating.
While all this is happening, a man named Milton Ramos is plotting revenge against Graves’ family. He has something very personal against Graves and his family, and as the story progresses we find out what it is.
Ramos accosts Graves' son at school, leaving a red paint handprint on the boy’s coat. A stranger picks up Billy’s dad, who has dementia, and leaves the older man to wander the streets of Harlem. A bag of bloodied clothes and toys are thrown on his porch.
Graves must find out who is after his family and why, and if it has a connection to the whites or his old partners, who once again rally to help Graves when his family is in trouble.
“The Whites” is a crackling good crime novel, one that you will stay up all night to finish. Its themes of family, honesty and the price of loyalty are beautifully done, and give the reader much to contemplate. And the city of New York is a terrific character here as well.
I liked the relationships, especially between Billy and his father, and Billy and his wife, and the writing is superb, definitely a cut above most crime thrillers. Fans of “The Wire” should pick up “The Whites”; it’s a great follow-up.
rating 5 of 5

Posted by (Diane) bookchickdi at 2:26 PM