The Women In The Castle by Jessica Shattuck 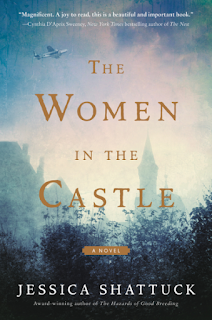 Two of the biggest publishing sensations of the past few years are Kristin Hannah's The Nightingale and the Pulitzer Prize-winning All The Light You Cannot See by Anthony Doerr. Both dealt with people trapped by the horrors of WWII in France and Germany.

Jessica Shattuck's new novel, The Women In The Castle, tackles that same era and will definitely appeal to readers who were so moved by those two books.

The story opens in November of 1938 at Burg Lingenfels, a castle in Bavaria, where the Countess' annual harvest party is about to begin. We meet Marianne von Lingelfels, the Countess' niece-in-law, who will act as hostess to the party. She is married to Albrecht von Lingelfels who fears that the Nazi regime and Adolf Hitler have become too powerful.

Albrecht is disgusted by the actions of Hitler, and actively participates in the resistance movement along with others, including Connie Fledermann, a man who is always the charming life-of-the-party and Marianne's dear friend. Connie is married to the beautiful, young Benita, and if Marianne admits it, she is a little jealous.

The action moves back and forth in time, and a few years later we find Marianne and her young children living in the castle, a shadow of its former grand self. Marianne has promised Connie that she take care of Benita and their young son, and along the way also picks up Ania, a refugee with her three children.

The three women and their children band together to survive the horrors and deprevations of war. We learn where Benita and Ania were before they came to Burg Lingenfels, and what they had to do to survive.

We see the horrors of war through their eyes, and some of the scenes are so jarring, such as the one of Ania and her friend seeing what they believe to be sacks of food piled high on open air wagons. As it gets closer they realize that the sacks are actually people. There are more than a few heartbreaking scenes in this searing novel.

The story moves along, following the war's end and what happens to those who survive. Some do their best to move on, forget the past, while others are haunted too much. Marianne does her best to live up to her high principles, even if that hurts those she loves, while others do whatever it takes to survive. Which way is right? That is the big question to be answered.

The women face many moral dilemmas, and the reader is left to wonder what she may have done in their situations. Shattuck does an admirable job of putting the reader in their shoes, making us identify with these women, creating empathy.

The Women In The Castle is a haunting story, one that you cannot rush through, but must read and contemplate. These characters' stories will stay with you for a very long time. Fans of Chris Bohjalian's The Sandcastle Girls and David Gillam's City of Women should put this one on your TBR list as well.

Thanks to TLC Tours for putting me on Jessica Shattuck's tour. The rest of her stops are here: