All The Ways We Said Goodbye by Beatriz Williams, Lauren Willig and Karen White

Parts of this review first appeared on auburnpub.com 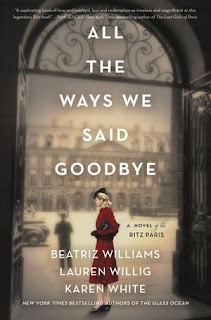 All the Ways We Said Goodbye, a triple timeline saga, is the third collaboration by authors Beatriz Williams, Lauren Willig, and Karen White (collectively known as Team W).

All The Ways We Said Goodbye opens up in 1964 on an estate in Devonshire, England. Babs is still mourning the recent loss of her beloved husband Kit, who spent time in a prisoner of war camp in Germany during WWII.

Babs receives a letter from an American lawyer whose father also fought in WWII and is now dying. He asks Babs’ to meet him at the Ritz Hotel in Paris to discuss La Fleur, a famous female French spy whom Kit knew, and who betrayed his father.

Aurelie is a young French woman living with her mother at the Ritz Hotel in Paris in 1914 during WWI. Aurelie’s mother entertains German writers and philosophers in her salon, much to the dismay of Aurelie.

When Aurelie leaves Paris to go to her father’s ancestral estate in the countryside, the German army is not soon behind, and they confiscate her family’s estate to make it their headquarters during the invasion. The Germans take over the town and force the townspeople into starvation and humiliation. Aurelie does her best to help her friends, even at risk to her own life.

Daisy lives with her American-born grandmother at the Ritz Paris in 1942 during WWII. Daisy’s grandmother is part of the Resistance, and soon Daisy helps the cause by delivering messages hidden in books from the local bookstore.

All these stories collide, and part of the fun is watching these three authors skillfully blend their storylines together to create one taut mystery. Who was La Fleur and what is her connection with all three women?

The research that goes into all of Team W's books shows up on the pages here. I'd love to see their notes and photos for this one. I also appreciate their strong female characters, they all show great growth as they realize what they are capable of doing.

Fans of Team W’s previous two books- The Forgotten Room (my review here) and The Glass Ocean (my review here) will enjoy the cameo appearances by characters from those two books  (especially the annoying Prunella Schuyler) in this latest one.  And if you liked Kristin Hannah's The Nightingale, Anthony Doerr's All The Light We Couldn't See and Amor Towles' A Gentleman in Moscow you will want to put this one on your to-be-read list. I highly recommend it, it is Team W's best book yet.