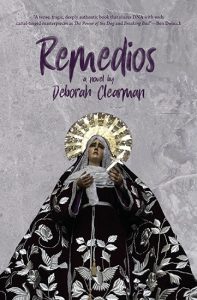 Two of the most intense television series I have watched are Breaking Bad and Ozark. Both deal with seemingly average people who become involved in the drug trade, dragging their families into the situation.
Deborah Clearman's novel, Remedios, is the literary equivalent of those two series. Fernando is a college professor, living with his wife and three children in Guatemala. They have a comfortable life, although Fernando borrowed money from a loan shark to renovate their home, and the payment is due. Fernando is unsure how he will be able to repay the money.
A childhood friend, Memo, shows up on his doorstep after nearly thirty years. The last time Fernando saw Memo was when they were teenagers, at a meeting that was violently attacked by the military. Fernando and his brother escaped, but Memo was caught and forced to become a soldier.
Memo now works for a dangerous Mexican cartel, and he comes to Fernando with a offer:  let them build a meth lab on his property. The money Memo will give him will enable him to pay off the loan shark, and  no one but Fernando needs to know what is going on. Fernando resists, but ultimately he agrees.
They concoct a story that Memo is building a cleaning supply manufacturing plant on Fernando's property, and Fernando is able to live with that until he discovers that his 14 year-old son Felix is working with Memo.
Fernando's younger wife Sandra has also become entranced by Memo, bringing him food and spending time with him. Memo encourages Felix and Sandra's affections for him, pulling them deeper into his web. Fernando feels helpless and impotent to save his family.
Remedios is a taut, intense novel that had my stomach in knots. Like Breaking Bad and Ozark, you watch as good people make bad decision after bad decision, wanting to warn them away from the danger. Reading Remedios also gave me a better understanding of the history of the civil war in Guatemala in the 1980s, and how drug cartels were able to use that to gain a foothold in that country.
If you're looking for a book that will get your pulse racing, a quick read at only 228 pages,  put Remedios on your list. I highly recommend it.

Thanks to TLC Tours for putting me on Deborah Clearman's tour. The rest of her stops are here: