New in Paperback- The King's Justice by Susan Elia MacNeal 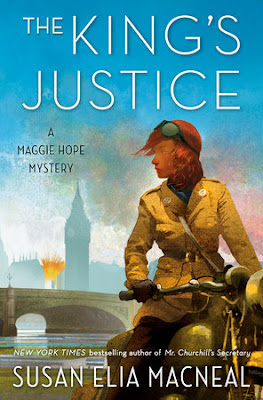 Now that I have binged the entire four seasons of Netflix's The Crown, I couldn't wait to return to the world of WWII in Susan Elia MacNeal's Maggie Hope series with her ninth book, The King's Justice.

We last left Maggie on an island in Scotland where she was forced to stay with other British intelligence agents who had been deemed security risks in The Prisoner in the Castle.  (My review here) Now Maggie is back in London, but she is no longer working for British intelligence.

Her job is still dangerous though, as it is 1943 and Maggie is part of a team who dismantles the many unexploded German bombs that lie in wait around London. She is training a young man, a conscientious objector who wants to do his part.

Maggie is dragged back into her past as the man she shot and helped put behind bars, Nicholas Reitter "the Blackout Beast", a wannabe Jack the Ripper, is awaiting sentencing for his crimes. While he is in prison, a copycat killer is on loose.

Reitter, in a Silence of the Lambs scenario, will only talk to Maggie, so she is pressed back into service to help track down the new killer. The scenes between Maggie and Reitter are incredibly tense, something MacNeal excels at as a writer.

MacNeal also does a great deal of research for her Maggie Hope novels, and in this one we learn about the prejudice facing Italian immigrants in Great Britain during WWII. I had no idea that Italian immigrants were rounded up and placed in custody, much like the United States did to Japanese- Americans following Pearl Harbor.

When it becomes apparent that the killer is targeting conscientious objectors, Maggie believes that that the police, including Detective Chief Inspector James Durgin whom Maggie has worked with and cares deeply about, should warn the objectors. Durgin doesn't want to tip off the killer and refuses, which causes Maggie much anguish.

Now that we are back in London after books set in Paris and Scotland, we see the toll that the war is taken on Maggie and her friends. Maggie is drinking way too much, her flatmates Nigel and his wife Charlotte are having marital problems, and her friend Sarah is still struggling after her horrific intelligence mission in Paris.

The King's Justice gives us everything we want in a Maggie Hope novel- a suspenseful mystery to be solved, catching up with Maggie and her friends, and a new look at a piece of WWII history we knew little about. (And as someone who recently visited the Tower of London, I really enjoyed the ravens section, we loved our tour of the Tower.)

Fans of Jacqueline Winspear's Maisie Dobbs series should begin the Maggie Hope series right away while we await the next Maisie book due in 2021. The new Maggie Hope mystery, The Hollywood Spy, set in 1943 Los Angeles, publishes this summer, and once again the cover is gorgeous. I can't wait! 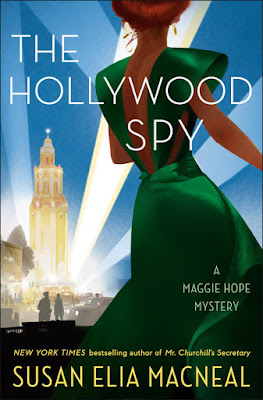 Posted by (Diane) bookchickdi at 4:31 PM