These Americans by Jyotsna Sreenivasan 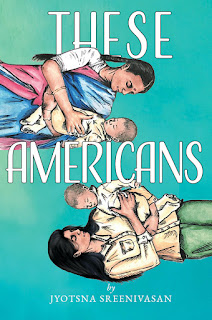 One of the books that ended up on my Favorites Bookshelf is a novel, And Laughter Fell From The Sky, by Jyotsna Sreenivasan. It is the story of two young Indian-Americans who are trying to find love and where they belong in the world while still respecting the wishes of their families. It's a wonderful story, with characters you care about and it's so beautifully written.
Sreenivasan's newest book, These Americans, is a short story collection that mines similiar territory. In the eight stories in this book, Indian characters are trying to find their place in America, while still holding on to the things they cherish in their Indian culture.
The book opens with "Mirror", where a young Indian woman is giving birth in 1967. Her husband is a doctor at the hospital, but he is not with his wife while she is in labor. She is unaware of American birth customs, which are so different from back home. Women help other women give birth in "nursing homes", not male doctors in hospitals as in America. She is embarassed to have people poking in her and when they offer her a mirror to watch the birth, she at first refuses.
There are interesting stories that deal with children assimilating in America. Amiya is mortified when her teacher wants the class to represent India in the school International Day festivities. Amiya wants to blend in, not stand out. Malini's older brother Pramod is having difficulty in school, cutting class, smoking cigarettes, and failing, suggesting he may be depressed. His father thinks he is lazy, and when the school suggests counseling after he is suspended, it is not discussed further.
I found "Mrs. Raghavendra's Daughter" very moving.  A widow for ten years, Mrs. Raghavendra raised her daughter Anjana on her own. She plans to travel to visit Anjana, who works in Washington, DC, and feels she can't rest until she finds her daughter a husband. She doesn't know that Anjana's roommate Susan is more than just someone to share the rent. Anjana goes to great lengths to hide this from her mother, but Susan suggests that maybe her mother is more understanding than she believes. I loved the character of Mrs. Raghavendra.
Another mother/daughter story, "Hawk", is the strongest and longest story in the book. Manisha has come to help her mother Bhagya, a doctor, move from Manisha's childhood home to an apartment. Bhagya gives Manisha a letter she wrote to her on Manisha's first birthday, explaining all her hopes and dreams for her baby daughter in America.
Bhagya spent most of her time at the hospital, building a stellar career as a doctor, yet as an Indian woman not getting the respect and promotions she deserved. Manisha was raised by nannies and her parents sent her to a prep school, where Manisha stood out from the privileged white boys who populated the school.
Manisha is now a sixth grade English teacher at an exclusive private school, and she enjoys her job and the students. She was hired as part of the school's new approach to diversity, the watchword of the year. One of her fellow teachers gives her tips on how to get along with the principal, parents, and students in order to stay under the radar.
Over the course of the year of the story, we see the struggles of Bhagya, who is having trouble concentrating. She writes her life story in a series of letters to Manisha, and we see what she had to endure to become a successful doctor in America.
"Hawk" is such an intriguing story of these two women, I would love to see a full-length novel sharing their entire life story. I found myself wanting to know so much more about them, and a further exploration of the mother/daughter dynamic.
Sreenivasan brings her characters to life, and in reading these stories that move from birth to death we learn the breadth of what it means to be an Indian-American, to try to blend your own culture with the culture of the people now surrounding you. These Americans is a perfect read for Asian American Pacific Islander Month, and will help you to be more empathetic to others, a goal of reading great fiction. I highly recommend it.
My review of And Laughter Fell From The Sky is here.

Posted by (Diane) bookchickdi at 1:48 PM