Eva And Eve by Julie Metz 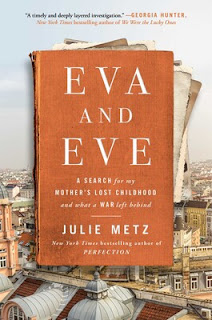 Mother  and daughter stories will always be popular, both fiction and nonfiction. Julie Metz's new nonfiction, Eva and Eve- A Search For My Mother's Lost Childhood and What A War Left Behind takes Julie Metz from her mother's childhood home in Vienna to Trieste in Italy to Manhattan where her mother ended up when she escaped to America during WWII.
Julie's mother Eve and her family lived in the beautiful city of Vienna, Austria. There was a vibrant Jewish community of 200,000 people there in the 1930s. (Post-war, it was 9000.) When Hilter came to power in Germany, his Nazi party wanted to reunify the Germans living in Austria, and so the anschlauss (annexation) of Austria began.
The property of Jewish people were stolen by the Nazis- homes, businesses, property- and Eva's older brothers were sent to London to protect them from a Nazi neighbor who had a grudge against them. Eva and her parents stayed in Vienna, and soon they were trapped in their home, ten year-old Eva unable to even go to school.
Eva's father Julius, with the help of some of the people who worked in the paper factory he owned, managed to raise enough money and get passports to get Julius, his wife Anna, and Eva to Italy and then on a boat to America where they settled in Brooklyn.
After her mother died, Metz found a notebook in her mother's dresser drawer, filled with notes to  Eva from her friends before the family left for America. Metz had a difficult relationship with her mother, who worked as an art director at Simon & Schuster publishers for many years, working her way up to an important position in the company.
Metz decided to find out more about her Eve's life as a child, when she was known as Eva, to better understand her mother. Julie traveled to Vienna and found the home where Eva lived with her parents and the factory her father owned. With the help of some kind people, she was able to uncover through photos and artifacts what life was like for her mother and grandparents.
She found photos and archival information about life for Jewish people during the anschlauss. She learned the details of how systematically the Nazis took everything away bit by bit from the Austrian Jewish population, deported them, and began to send them to concentration camps.
Metz also visited Trieste, Italy, where her mother's family traveled and stayed for nine days, awaiting the ship that would take them to America.  She followed in their footsteps to better understand what happened to them and others.
Using both information she could verify and the feelings that she imagined her mother and family had as they watched their lives being taken away from them, Metz puts the reader into the minds of Eva and her family. We feel what they feel.
Eva and Eve is also part travelogue. Metz takes the reader to Vienna and Trieste, two cities I didn't know much about. We get a real taste for the food and culture of both cities.
If you only know about what happened in Austria during WWII from watching The Sound of Music or the one paragraph in your high school history book, reading Eva and Eve will give you a better perspective. On a microlevel, it examines how that trauma shaped the life of Eve, and how that affected her relationship with her daughter. I recommend it.

Thanks to TLC Tours for putting me on Julie Metz's tour. The rest of her stops are here: