Fed Up! by Colin Lancaster 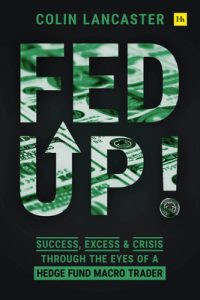 As someone who lives with people who are glued to CNBC weekdays from 7am-5pm, I thought reading Colin Lancaster's Fed Up!- Success, Excess, & Crisis Through the Eyes of a Hedge Fund Macro Trader would enlighten me, as I don't really follow what commentators on CBNC are saying.
Lancaster takes us through the pandemic year in the eyes of a hedge fund macro trader. As he explains it, macro "is about investing in assets on the basis of changes in the fundamental landscape: the ups and downs in growth and inflation rates. It's about understanding business cycles, and how government spending and central bank policies will impact those cycles."
Lancaster and his people spend a great deal of time, and money analyzing macroeconomic data, with a particular focus on central banks. There is a lot of studying, and some guesswork. During the pandemic, many central banks across the world scrambled to keep their economies from collapsing, which made for an interesting time, and lots of money for people like Lancaster.
I learned a lot, although I still am baffled by most of the acronyms in the book (thank goodness for the glossary of terms in the back of the book), and I found many of Lancaster's observations intriguing.
He said that working on Wall Street "warps your mind". Your first year, you can't believe how much money you made, feeling lucky. The next year, you believe your compensation is fair. Every year after that, you feel cheated. He says you lose all sense of reality.
I found his commentary on bailouts interesting, that along with monetary policy, have led to assets going up in value, with wealth inequality increasing. When central banks cut rates and buy assets, "capital flows to unproductive parts of the economy and the American dream withers on the vine". He believes these policies have led to the demise of the middle class, with the 1% getting richer, and everyone else suffering. He says that the US has exported the middle class to China.
Lancaster also analyzes recent Fed chairpeople, including Paul Volker, (under Carter and Reagan) whom he says was the "last person willing to deliver bad news and take appropriate action." Alan Greenspan was "the maestro" (from 1987-2006), a time during which capitalism exploded, along with greed. Ben Bernanke (2006-2014) came aboard just before the Global Financial Crisis. Janet Yellen (2014-2018) was even-keeled, and Jerome Powell's (2018 to current) "bubble will put Greenspan to shame".
After studying thirty years of employment data, Lancaster concludes that the "job market is more split than ever before. Middle-skill, middle-wage jobs are gone." He said that all the new jobs are in leisure and hospitality. "You're either a tech guy flying private or a bartender with no skills. Either polish up on your math skills or learn how to pour good margarita."
We meet the smart people on Lancaster's team, they all work insane hours and, but their compensation makes up for it. Lancaster and his family live in the poshest part of London, and when he tires of the lockdown in London in early 2020, he buys an expensive condo in Miami, where restrictions are looser.
If you are a CBNC junkie, you will get more out of Fed Up than I did. That being said, I found Lancaster's observations fascinating. There are many books out there about the pandemic from government and health care policy perspectives, so his take on the pandemic from a macro-financial perspective is unique, and I will have more to add to family conversations now. I recommend Fed Up.

Thanks to TLC Tours for putting me on Colin Lancaster's tour. The rest of his stops are here: