The Guncle & How Lucky

February is the month we celebrate Valentine’s Day and love. This month’s Book Report features a few books I loved, but not necessarily books about romantic love.

Steven Rowley’s fantastic novel The Guncle is about Patrick, an actor who made his fame and fortune on a television sitcom a few years back. When the sitcom ended, Patrick left Los Angeles behind and moved to the solitude of Palm Springs away from everyone. 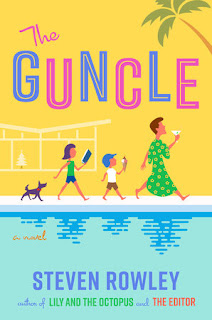 Patrick’s best friend Sara married his brother Greg, and they had two children, Maisie and Grant. When Sara dies, and Greg has to deal with some troubling issues of his own, Greg asks Patrick to take in Maisie, age 9, and Grant, age 6, for the summer.

Patrick agrees, and the children go to live with the man they call GUP (Gay Uncle Patrick). He doesn’t know much about caring for children, but he does know about dealing with grief after losing his boyfriend in a car accident a few years ago.

They fall into a routine, riding bikes in the morning, swimming in the pool, having dance parties, going out to eat. Things seem to be going as well as they can until Patrick’s sister Clara comes to town and wants to take the children back to their home in Connecticut. She believes she is better suited to care for the children until their father can come home.

The Guncle is a lovely, heartfelt story with characters you’ll fall in love with. Patrick grows to deeply love the children, and he gives them the sense of security and understanding they need. They in turn open Patrick’s heart up after it was broken in grief.

Although the story is tinged with sadness, there is humor in it as well. Patrick sprinkles in his ‘Guncle Rules’, like this one: “Guncle Rule number eight: Make the Yuletide gay”, something they did when they put up their Christmas tree in the summer to celebrate the holiday early and left it up all summer.

The Guncle is a story about a family lifting each other up and loving each other. You will smile throughout, and tear up at times. The dialogue is wonderful, and I think it would make a terrific movie.

Will Leitch’s terrific novel How Lucky has a unique protagonist.  Daniel is a 26 year-old man who has SMA (Spinal Muscular Atrophy), a debilitating disease that leaves him unable to speak or move (other than his left hand) and using a wheelchair. He works monitoring a customer service Twitter account for a small regional airline, and lives on his own in the college town of Athens, Georgia. 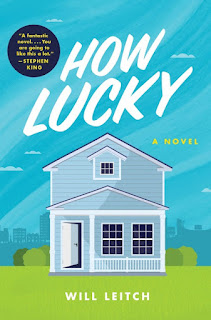 His childhood best friend Travis and an immigrant home health aide Marjani help care for him. Everyday Daniel sees a young woman walking down his street on her way to class. One day he sees a car stop and she gets in.

The young woman ends up missing. She is a Chinese student who, like Daniel, has trouble communicating as she doesn’t speak much English. Daniel and Travis contact the police about what Daniel saw, but when a young policeman stops by Daniel’s house, the communication problems cause the policeman not to take Daniel seriously.

Daniel turns to the internet site Reddit to alert a group of students searching for the missing woman. The man in the car sees the Reddit post and responds to Daniel. Daniel keeps in contact with the man, hoping to find out what happened to the missing woman, but it also may be placing himself in danger.

How Lucky is a real page-turner, and some people have compared the premise to the famous  Jimmy Stewart movie Rear Window, which is an apt comparison. The reader also learns what it’s like to live completely dependent on others for day-to-day living.

This book has it all- great characters, a fast-paced story, an interesting setting, a mystery to be solved, and How Lucky is nominated for an Edgar Award for Best Novel. Like The Guncle, Travis, Daniel and Marjani become a family who care for each other.

The Guncle by Steven Rowley- A+

How Lucky by Will Leitch- A+

Posted by (Diane) bookchickdi at 8:34 PM