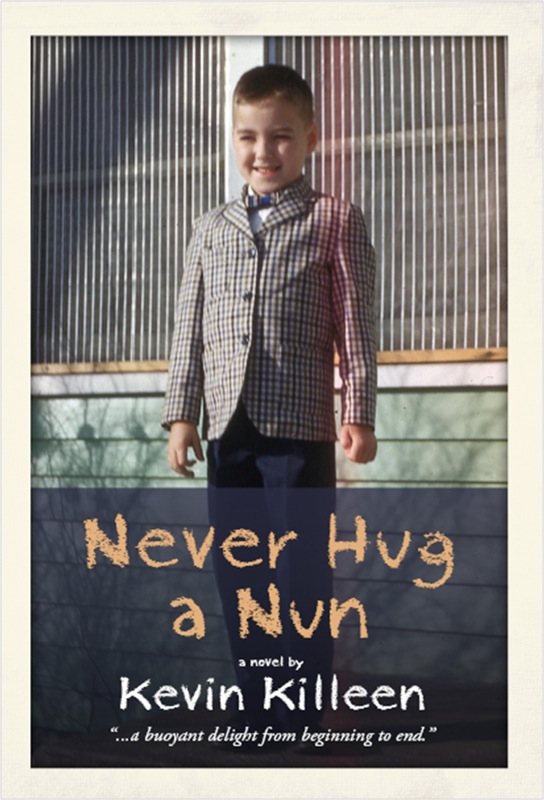 Maybe it's because my mother-in-law gave my younger son a similar coat with lollipops taped on them to bring to preschool on his birthday that I can't resist this cover. And that grin; this may be one of the most perfect book covers ever.

Killeen wrote Never Hug a Nun, a comic novel set in a St. Louis suburb in 1966 in the voice of eight-year-old Patrick Cantwell. Patrick is in the second grade at Mary, Queen of Our Hearts School and has a ten-year-old brother John (who wants to be a Beatle and start a band) and younger brother Teddy (who likes sports and hates green beans).  Mom loves to listen to big band music while she irons and Dad works downtown, a goal for which all of the nuns encourage the boys to strive.

Patrick has a crush on golden haired Ebby, and he is consumed with trying to be near her. Patrick and John have a friend Kurt who is "a bad influence" on the Cantwell boys. Kurt has a secret fort near the railroad tracks and he has ideas about stealing money to buy a drum set so they can start a band, like the Beatles. As a mother of two grown sons, I can tell you that Kurt is the boy we all pray our kids will not hang around.

This novel brought back many memories for me; the scene where Patrick's mom glues Green Stamps into books immediately put me back in my childhood kitchen where my mom would do the same thing, hoping to have enough to get a toaster or a lamp. I could almost smell the Green Stamp glue as I read.

I too went to Catholic school, and know well many of the nuns and monsignors from Patrick's school. I smiled at the scene where the nun washed the blackboard with the sponge; it was an honor to be asked to wash the blackboard at my school. And the constant reminders by the monsignor to get out there and sell those raffle tickets for the car? Yep, been there many times.

I like the well-drawn adult characters in this novel. Grandpa loves his grandkids and takes them to a Beatles concert, even though he knows nothing about the Beatles. Oh yeah, and he accidentally gets a little stoned and arrested, but whose Grandpa hasn't done that?

Aunt Jenny is studying to be a nun, with some reservations. She has a sweet relationship with Patrick and I was glad to see that she returns for a few scenes at the end of the book. I think she warrants her own story, and would like to see her in her own book.

Mom and Dad are interesting too. Dad hates dragging himself "downtown" everyday to work, but he loves his family and that is what a good dad does. I love that he tells his sons that they can tell him anything, and he proves that later in the story. Mom adores her husband and sons, but would like to add a daughter to their family. She desires to be a good Catholic family.

As the only female in our family, I find books written from the male point of view fascinating. I always learn something. But I did not need to learn what goes on in the boys' bathroom at school; that scene just had me shaking my head- what is up with boys? And many is the time I wanted to say to Patrick- NO! Stop and think for a second, son.

Patrick will probably grow up to be a protagonist in a Jonathan Tropper or Jess Walter book; fans of This Is Where I Leave You and The Financial Lives of Poets are the perfect audience for this book. Kileen bills Never Hug a Nun as a comic novel, but it has a lot of heart too.

Thanks to TLC Tours for providing me an opportunity to be on this Tour. For more reviews, click here.