The Monkees Reunion Concert at the Beacon Theater

When I was a little kid, I was a big Monkees fan (I was a Micky girl). After Davy Jones died, I went to his memorial concert at B.B. King's, and so I was happy to hear that Mike Nesmith would be joining Peter and Micky for a 12-date reunion tour, his first joint venture with the band since 1997.

December 2nd was the last date on the reunion tour, with a concert at the Beacon Theater. I went with my friend Paula and her friend Kelly. When they let us in the theater, people thronged the concessions to get their t-shirts, buttons and tour books. The people working said that they have never seen such a big crowd at the concessions.

Paula and I each got a beverage- a Daydream Believer, with vodka, triple sec and cranberry juice. It went down quite smoothly. 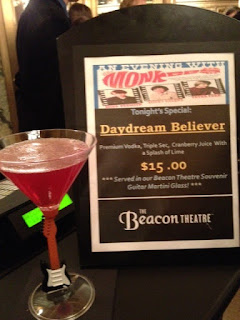 Before the show began, they played videos of the Monkees, including some of the Kellogg's and KoolAid commercials they did. The most interesting video was a tribute to Tommy Boyce and Bobby Hart, two songwriters and singers who contributed many Monkees songs, such as I'm Not Your Stepping Stone, I Wanna Be Free, and Last Train to Clarksville. I had no idea they were so involved with the legislation lowering the voting age to 18.

The crowd jumped to their collective feet when Mike, Micky and Peter took the stage, and we stayed there pretty much the entire show, singing along to almost every song. It was great to see Mike back and he was clearly the one that many people came to see. He sounded pretty good, and some of the highlights for me were:
The entire set list is here.
They played two videos featuring deceased member Davy Jones (I Wanna Be Free and Daddy's Song) and Micky sang As We Go Along as a tribute to Davy, but there was not much talk of him and there is not one photo of Davy in the concert tour book. It would have been nice to have one photo of all four of them together in that.

The night was one big singalong party, and we all had a great time. I found some great videos on YouTube from the show, and you can find them here. 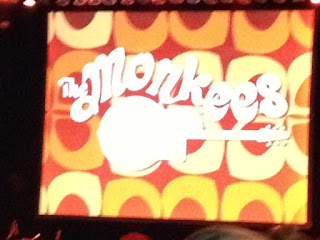 I also took some photos, and a few came out OK. 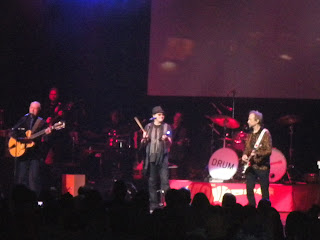 I don't know why this guys are not in the Rock and Roll Hall of Fame, they certainly deserve it. I'll close with a photo that I took of the girls waiting outside a hotel for the guys from One Direction to come out. As Paula said, 40 years from now, if they are lucky and anyone still cares who One Direction is, they will be like us, excited to the guys again.

Posted by (Diane) bookchickdi at 7:59 PM