Random House publishing held an Open House on December 14th at their offices on Broadway and 55th in Manhattan. It was a great day and good to meet new friends, JoAnn from Lakeside Musings and her daughter, and catch up with bookish friends, Candace, Nicole, Alison and Colleen.

They had some interesting discussions, including one between author Anna Quindlen (who is one of my all-time favorites) and her editor Kate Medina, a panel discussion with the team (acquistions, editing, publicity and marketing) who worked on Justin Cronin's novels The Passage and The Twelve, Self magazine's editor Lucy Danziger talking about a new book The Drop 10 Diet, and a closing talk with Kurt Andersen (True Believers), Charles Duhigg (The Power of Habit) and Slate.com's Emily Bazelon on the 2012 election.

There were also some food related parts to the day. Chef Marcus Samuelsson, author of the critically praised and best-selling memoir Yes, Chef talked with his editor Andy Ward and Huffington Post Food Editor Carey Polls about his life and the journey to put his story on paper.

The talk was fascinating, with Samuelsson speaking about how "trust was the key thing" between himself and Ward. Ward spoke about how Samuelsson is a person who is "always in motion", and Ward had to get him to slow down and deepen the moments he was writing about. He gave as an example the time that Samuelsson was in a terrible car accident that killed Samuelsson's friend and left him injured. Samuelsson did not want to dig deep into those feelings, but Ward convinced him of the importance of doing just that.

Samuelsson advised everyone to write down their own story, even if it is just an exercise. He believes that going through the choices one has made in life, and thinking about what happens after those choices are made is important to understanding one's life.

They also talked about the evolution of food writing and food memoirs, and how eating is different in different cultures. In Ethiopia, where Samuelsson was born, he said "the map of eating is driven by spirituality." In Sweden, where he grew up with his adopted family, it is driven by seasonality. He talked about how Americans don't eat like other countries, citing our 'food holidays' like Thanksgiving and the Super Bowl.

In the Q&A section, a woman in the audience asked him to describe and label his cuisine, and his answer was fascinating. He wanted to know why it was important for her to have labels, and then he described how everything around him inspired his food. At his restaurant, The Red Rooster in Harlem, he said that everything from the art curated on the walls to the nationality of his employees to the makeup of the people who live near his restaurant impact the menu.

Harlem is a melting pot, with African-Americans, Mexicans, West Africans, Jewish and Italians all living there and influencing what Samuelsson puts on his menu. He wants the menu to "reflect the location and ambition of where we are going".

I've heard many good things about Yes, Chef, and have had that book on my radar for awhile, so I was excited to meet Marcus Samuelsson and listen to him talk. And getting to meet him and receive an autographed copy of the book was pretty cool too. 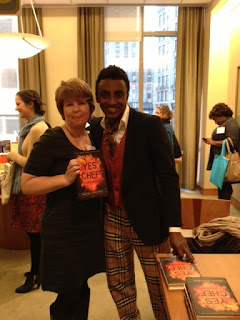 Posted by (Diane) bookchickdi at 9:01 AM