Journey to Munich by Jacqueline Winspear 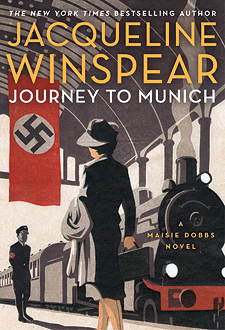 The Maisie Dobbs series by Jacqueline Winspear is the only series of books that I have read all the way through. When I was first introduced to the young nurse/psychologist/private investigator and her friends and colleagues in London just before WWI, I was hooked.

I have followed Maisie and company, with all their ups and downs and truly feel like they are friends. Each spring I look forward to catching up with everyone in Maisie's world.

When we left Maisie at the end of book 11, A Dangerous Place, she was returning home to England after a stay in Spain during their civil war. She had suffered two devastating losses and was grieving. It was a very somber and sad story, and we didn't see many of Maisie's friends and family.

Book 12, Journey to Munich brings Maisie back home, trying to rebuild her life. She is living with her best friend Priscilla and Pris' family, who adore Maisie. Soon Maisie is recruited once again to help the British Secret Service.

Maisie agrees to go undercover in Munich to help bring home a British businessman who is being held prisoner by the Germans. The year is 1937 and the Nazi party is growing in power. The man is believed to be in a concentration camp, and Maisie must impersonate his daughter to rescue him.

Times are dangerous in Germany, and another world war is on the horizon. Memories of the horrors of WWI remain in Maisie's mind, and she fears for the future of Europe.

Maisie has also agreed to help find the daughter of another powerful man in England, to convince her to come home. She has a connection to this young lady, one that she would rather forget, yet she agrees to try.

Journey to Munich is a strong entry in the Maisie Dobbs series. Maisie has gone through so much, it's good to see her back on her feet and trying to move her life forward. The storyline is interesting, and as always, Winspear has done her research into what life was like at that time, in that place.

We get to see more of the gang- Pris, Sandra and my favorite Billy- and the end of the book the readers are rewarded with the possibility that Maisie and company will be back together working to solve cases.

As England moves closer to war once again, I expect that the next books in the series will deal with this. England lost so many young men in WWI, an entire generation, that the prospect of going through that again is a frightening one.

Maisie Dobbs is an incredibly strong literary heroine, and these books are great reads for young women and for anyone who enjoys historical mysteries. For a woman in her era to do the things that Maisie does with such strength, compassion and intelligence is a wonderful example for girls. She has her flaws too, and that makes her human.

I give Journey to Munich my highest recommendation and it is one of the best books in the series.

Thanks to TLC Tours for putting me on Jacqueline Winspear's tour. The rest of Jacqueline's stops are here.