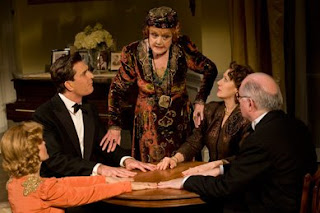 I got to see the fabulous Angela Lansbury on Broadway last night in Blithe Spirit, a revival of a Noel Coward play. At 80+ years of age, she has the energy and vitality of a woman half her age. Critics agreed as she was awarded the Tony award for this role last month.

The dashing Rupert Everett is right at home on stage playing Charles, an author who invites a medium, Madame Arcati (Lansbury) to hold a seance at his home. He hopes to study her as research for a new book.

Lansbury goes into a trance, complete with a silly dance that had the audience in stitches. She conjers up the dead wife of Charles in the form of the luminous Christine Ebersole. She plays the role of Elvira as a cross between Carole Lombard and Judy Holliday, even down to the platinum wig. You can't help but giggle when she throws her little tantrums and stamps her feet.

Since only Charles can see Elvira, this is a problem. Charles current wife, Ruth, portrayed magnificently by Jayne Atkinson, thinks that her husband may be losing his mind. The repartee between Everett and Atkinson is priceless, and although Atkinson gets fourth billing in the show, for my money she gave the best performance of the four.

Noel Coward's dialogue requires actors to be on their toes, and all of the actors are more than up to the task. It was like watching ping pong players the way they quickly bounced their witty lines off each other.

The conflict between Elvira and Ruth, with Charles stuck in the middle, provides big laughs, and Lansbury is so expressive and so in-the-moment in each of her scenes, you could see her reactions all the way in the back of the theater.

One thing I have noticed in many plays (particularly in revivals), the role of the maid/butler is a richly humorous one. Christine Baranski in Boeing Boeing, Charles Kimbrough inAccent on Youth and now Susan Louise O'Connor as Edith, the maid with nervous energy in Blithe Spirit. The audience loved her performance.

Blithe Spirit closes July 19th, but if you have an opportunity, you should see it for the lead actors' performances. (I loved the costumes too, especially Ruth's.) It will give you a good belly laugh, and my only complaint is that is went on too long; a cut of ten minutes in the last act would have been prudent.
Posted by (Diane) bookchickdi at 5:09 PM