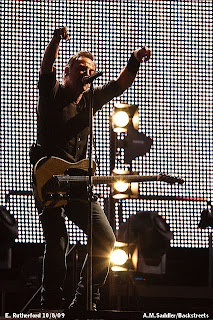 Last February, I tried to get tickets to Bruce Springsteen's May concert at Giants Stadium and was caught up in the nightmare of TicketMaster's snafu. I got so mad that I called Channel 7 Eyewitness News and was interviewed at my apartment by their 7 on Your Side reporter about the problem. Even after attempts to get somewhere with the New York and New Jersey Attorneys General, I was out of luck.

So I was very happy when Springsteen announced that he would be back at Giants Stadium in October. I promised my sons that I would get tickets, and was lucky enough to score seats just to the right of the stage in the first level up.

Springsteen and the E Street Band were in fine form as usual. They rocked out, even if they were just a step slower than when I saw them just over a year ago in the same venue. They played most of their big hits, including Tenth Avenue Freezeout, a song my older son was waiting for. During one of my favorites, Hungry Heart, Springsteen ran around the stadium like a man thirty years younger, and then body surfed the crowd.

Max Weinberg's son pounded the drums during Born to Run, adding a new energy to the song. Springsteen tried a new idea, playing one entire album beginning to end, and on the night we were there, it was Darkness on The Edge of Town, a band favorite, but not necessarily a fan favorite. I think it took the energy down a bit, and I would have enjoyed Born to Run or Born in the USA, which they did on the other nights.

During the section when Bruce runs through the crowd pulling out signs with song titles on them that people held up, he chose Elvis' Jailhouse Rock, which I loved. Their rendition was faithful and fun.

American Land ends the show, which is fun because the entire band comes out and plays this Irish tinged tune with joy. Springsteen and Little Stevie dedicated encore Rosalita to the missing Mrs. Springsteen, Patti Scialfa.

There's always a song that you wish he would have done, and for me that was Glory Days. It's such a Jersey song, I'm surprised he didn't do it. But no one gives you more for your money than Bruce and The E Street Band- three hours of non-stop music that leaves the audience drenched and happily exhausted.
Posted by (Diane) bookchickdi at 6:27 PM