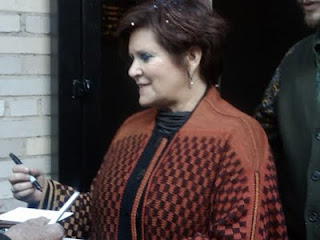 Carrie Fisher turned her funny book Wishful Drinking into a stage production and it's now on Broadway at Studio 54.

I enjoyed her book and her first (autobiographical) novel, Postcards from the Edge, which was turned into a brilliant movie starring Meryl Streep and Shirley MacLaine, so I looked forward to seeing the show.

Fisher engages the audience right away, tossing gobs of glitter on the front row as she wanders among them. She involves a few of them in her show, and it definitely enhanced the experience.

The show is about Fisher's life- her family, her iconic role in Star Wars, her marriages (first to music icon Paul Simon and then to a closeted gay man with whom she has a lovely daughter), her addiction to pills and eventual diagnosis of bipolar illness.

She starts out right away talking about her gay male friend who died in her bed right next to her. She explains the circumstances and finds some humor in what was a horrible experience for her.

The funniest part of the show occurs when a board of photos descends and she uses it to show how she explained to her daughter, who wanted to date Elizabeth Taylor's grandson but feared that they were related, how the family tree worked.

She explained that Debbie Reynolds (her mom), Eddie Fisher (her dad) and Liz were the Jennifer Aniston, Brad Pitt and Angelina Jolie of their day. She shows how Debbie had terrible taste in men, which Carrie seemed to inherit, and how Eddie's wives got progressively younger as he aged. She involved Greta, an audience member, in this howlingly funny explanation. She calls it Hollywood Inbreeding 101.

Her impression of her mother is so delightful, and it is sweet that they live right next door to each other in California. Carrie has clearly inherited her mother's sense of humor and survival.

Star Wars. She pokes fun at her infamous hairstyle that highlighted her pudgy cheeks, the merchandising juggernaut and how George Lucas owns her likeness and so she appeared as dolls, shampoo bottles, soap, and a Pez dispenser. A life-sized concrete likeness of her (with enhanced breasts) that is sold as a sex toy on Ebay comes down from the ceiling to emphasize her discussion.

Fisher uses several photos as backdrops, including a photo of her in Princess Leia regalia that is in a textbook on mental health, illustrating the Bipolar Disorder chapter. At the end of the show, tabloid headlines about her and her family fly across the screen behind her as Fisher sings "Happy Days Are Here Again" in a lovely, strong voice. She sings as well as she writes, and that's saying something.

The show is very funny, and touching as well. Fisher lays bare her life- her successes, her failures, her frailties- for all to laugh at and empathize with. That she made it through and is able to laugh at it and make us laugh at it, is a gift. If you want a good laugh, go see Wishful Drinking before it closes in December.

I waited outside the stage door to get my copy of her book signed, but was disappointed when Fisher's people told us that she would sign only the stage program or ticket. She came out right away after the matinee, but seemed much more reticent towards the handful of people waiting for her than she was onstage. I guess I'll chalk it up to the fact that she just spent two hours talking onstage and had to come back in a few hours and do it all over again.
Posted by (Diane) bookchickdi at 5:31 PM