An evening with Adriana Trigiani 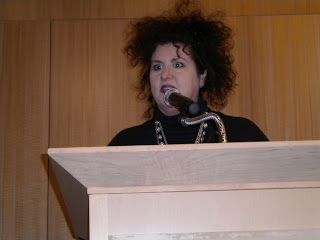 How does one describe attending a reading with author Adriana Trigiani? You can sense the moment she walks in the room, the air becomes vibrant, and you can hear her booming voice greeting the overflow audience.

Usually at a reading, someone from the bookstore reads a short bio about the author and introduces her. Adriana strides up to the podium, gushing over the bountiful bouquet of flowers on the desk, a gift from the founders of the Barnes & Noble chain, who were represented in the audience and introduced by Adriana. (I've been to many book signings, but I've never seen flowers given to the author by the store.)

She launches into a story about her father, stops and says, "You need to introduce me, right?" to the Barnes & Noble manager, which elicits a huge laugh from the crowd. She was off and running, and we clearly did not want to stop for an introduction now.

As people came into the room, Adriana would stop and acknowledge them "Nice beret, Elaine", "How you doin' Joe?", and as three young women came in, she exclaimed "How cute are you? Get in here!" She said that they were clearly Italian girls, and they took the time to blow out and style their hair, something that Adriana did not do herself, having done her hair once that day for an appearance on "The Today Show". Once you get to certain age, and you are married, you are not going to do your hair twice in one day.

Adriana joked about her looks, saying that on her mother's side of the family, everyone looked like Armand Assante, the handsome Latin actor, and on her father's side, they all looked like a cross between Louis Prima and BB King. She said it was obvious which side she favored.

As anyone who has read any of Adriana's books knows, family is a big topic for her; she has four sisters and two brothers. She likened her family to an octopus, connected by tentacles. She joked that it took her and her sisters 35 years to figure out that if they needed to give their mother bad news, they would have their brothers do it. Their mother thought that her sons walked on water, whereas the daughters were a repository of their mother's litany of aches, pains and complaints.

Jokes about marrying an Italian man elicited many laughs. She claims that it is not in an Italian man's DNA to be faithful, and that she did not want to spend her Saturdays ironing her husband's shirt so that he would have something nice to wear when he went out later that night with his girlfriend. She said that non-Italian men are so grateful when their wives cook them a meal, but Italian men expect it. It's much easier to please a non-Italian man. (Her husband is of Scottish decent, like Jack Mac from Big Stone Gap)

Her impression of Italian women saying with a sad sigh, "Where'm I gonna go?" when asked why they don't leave their straying husbands had all of the room in stitches. I'm still laughing about it today.

Adriana told stories about her friends in the audience- an older couple who were the first people to be married at Leonard's, the reception facility featured prominently in the delightful first scene of Very Valentine, a hilarious story about her tough negotiator of an agent, which involved a phone call her agent made to a man that referred to her taking a part of his male anatomy "putting them in a ziploc bag and placing the bag on her desk", and then inviting an audience member she had met at a previous book signing to come and tell how Adriana ended up taking her and her entire family to lunch when they didn't win a contest to have lunch with Adriana.

In the Q/A section of the event, movies were a big topic. Adriana is set to direct a big screen adaptation of her Big Stone Gap novel, with Ashley Judd to play Ave Maria. The big scoop is that Very Valentine has been optioned by Lifetime TV as a movie, and although they changed the ending of the novel, I am so excited to see this movie. I can't wait to see how gorgeous the Angelini shoes look!

The funniest comment of the night came when an older woman in the audience told Adriana that she'd be "so pretty if she just fixed her hair". It was if she was channeling Adriana's grandmother!

Her readers mean a lot to Adriana. Not only does she personalize each book (and most people bought multiple books), she takes the time to speak with everyone in line. She makes a personal connection with each person, asking about family, telling people to call her, and you believe she really means it. When I told her who I was, she said that someone had sent her the review I had written for Brava, Valentine and how much she appreciated it.

If you have the chance to see Adriana in person, you MUST do it. I have not laughed so hard in a long time, and she makes everyone feel like an intimate friend. If you weren't one of her friends when you went into that room, you were definitely one when you left. If you haven't read Very Valentine or Brava, Valentine yet, go get both books. It's going to be a lousy weekend to go out, and a great weekend to stay in and read.

Her tour schedule is here: http://www.adrianatrigiani.com/dates.html

My review of Very Valentine, is here:
http://bookchickdi.blogspot.com/2009/05/love-italian-style-via-greenwich.html