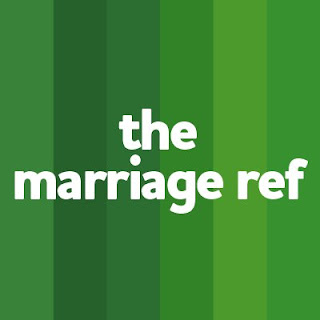 I was lucky enough to get to attend the tapings of a sneak preview and the first episode of a new NBC show, The Marriage Ref, starring comedian Tom Papa and executive produced by Jerry Seinfeld.

The premise of the show is that married couples have the same fight over and over again. What if there were a referee who could decide who the winner of the fight is? That's where Tom Papa comes in. He is hilarious, and this show should deservedly make him a star. He has a winning personality and comes across well on this show.

Couples are videotaped in their homes, fighting about the things we all fight about. (One observation: people are a little nuts about their pets. I know, I know, I was too when I had a dog, but not to this extent.) After the video, Tom asks a panel of three who should win the argument. On the premiere episode, the panelists were Jerry Seinfeld, Kelly Ripa and Alec Baldwin.

The panelists were quite humorous, Alec Baldwin in particular was an audience favorite. He seemed to take his role seriously, but he has a wicked sense of humor that fans of 30 Rock well know. His comments were funny and dead-on. All of the panelists meshed well together, and it was great to see Jerry Seinfeld back on TV. As anyone who saw Curb Your Enthusiasm this past season knows, he has not lost his comedic touch; if anything, he has sharpened his wit.

Legendary sportscaster Marv Albert has a role on the show, and he plays it deadpan for laughs. The Today Show's Natalie Morales is the "Just the Facts" person, whom Tom goes to for interesting facts that shed light on the argument. While Natalie is gorgeous, she doesn't have much to do here, and it is the one part of the show that needs work. She's a smart lady, and her talent seems wasted here. Hopefully as the weeks go on, this part will work better.

Comedian Joey Kola, a veteran at warming up audiences (The Rosie O'Donnell Show, Martha Stewart), got the crowd revved up and ready to go for the show. This is his forte, and his cat impression is one that won't be forgotten for a long time. Tom Papa said that it is one of the funniest bits he had ever heard, and I agree.

I think that everyone who is married will identify with The Marriage Ref. The arguments I saw were relatable, and the couples seemed natural. The couples are seen live via satellite to get the results from the ref, and this part of the show is really funny. Fighting over a mean dog, where to park the husband's motorcycle, a Mariah Carey obsession- it's all funny and it's all real. Watch it with your spouse; it's sure to spark conversation and laughs. Even better, invite your married couple friends over for a Marriage Ref party; you'll all have a blast!

I think The Marriage Ref will be a HUGE hit for NBC, and they sure can use it now. The sneak peek will run on February 28th , following the Olympics closing ceremony on NBC, then it moves to its regular time slot of Thursdays at 10pm on March 4th. If you need a good laugh (who doesn't?), don't miss The Marriage Ref.
Posted by (Diane) bookchickdi at 1:40 PM