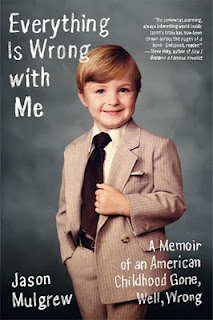 Jason Mulgrew has a popular blog entitled Everything is Wrong With Me: 30, Bipolar and Hungry. He writes humorously about his life and reading his posts about the NCAA tourney, hanging out in bars, living in NYC, it reminds you of pretty much most guys you know in that age group.

Mulgrew is now a published author, which for the slacker that he describes himself as, is quite an accomplishment. Everything is Wrong Me: A Memoir of an American Childhood Gone, Well, Wrong appeals to anyone who grew up in a (slightly) dysfunctional family, which would be, like, all of us.

The photo on the cover is of Mulgrew as a young boy wearing a brown pinstriped suit, looking like he is ready to attend the Republican National Convention. Don't let the cover fool you (although you will laugh out loud at it!) There are many photos of Mulgrew and his family sprinkled throughout the book, it's like looking through a family photo album, with humorous asides from Mulgrew accompanying them.

Mulgrew grew up in an Irish working class neighborhood in Philadelphia. His parents play a big role in this memoir, particularly his longshoreman father, who worked hard, drank hard and got into many fights. His father loomed large in his life, even though he didn't live with the family for extended periods. (And surprisingly, it wasn't because he was in jail.)

Irish-Catholics will appreciate his description of his baptism party.

The interpretation of "big Irish Catholic party" varies, but basically there's a prayer at the beginning and then a lot of drinking until people fall down. Also there's some crying and singing involved and usually one relative will try to punch another. Then comes the falling down. Welcome to every family christening, birthday party, graduation and wedding I've ever been to.

Mulgrew tells stories of his childhood, many of the memories supplied by his Mom and Dad. Mulgrew uses footnotes as funny asides at the bottom of the pages to further explain the insanity. One of the funniest stories involves Mulgrew's scheme to sell fireworks not only to make some money, but to move up on the coolness scale. It's a genius idea, making good money until Mulgrew's partner, his pal David, decides to stop at home for a Lunchable and gets caught by his mom. It's the age-old story: a great career derailed by a Lunchable.

The book is filled with usual guy stuff- guns, alcohol, trucks, girls, running from the cops. Its universality is its appeal, along with Mulgrew's genial style of conversational writing. It will make a funny audiobook.

The best story of the book happens after Mulgrew has finally turned in his manuscript for the book after missing many deadlines. His father says to him, "Did I ever tell you how I was arrested for attempted murder?" The story that follows is fabulous, and it fits that his dad wouldn't tell him until the book was done.

While this book isn't for everyone, it would make a good gift for your brother, your funny uncle, or anyone who likes FX TV's It's Always Sunny in Philadelphia.

Thanks to Harper Perennial for providing a copy of this book
Posted by (Diane) bookchickdi at 1:24 PM