The Elephant Keeper casts a spell 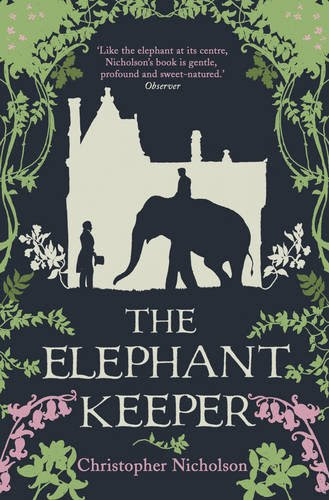 Fictional books about animals are in vogue, with Sara Gruen's Water for Elephants, Garth Stein's The Art of Racing in the Rain, and Yann Martel's Life of Pi, each experiencing an extended stay on the bestseller list.
Add Christopher Nicholson's The Elephant Keeper to that list. The book cast a spell upon me, and I read it in two sittings, unable to put it down. Set in the late 1700s, the novel tells the tale of young Tom Page, who is tasked by his employer to write a book about the elephant he has been caring for many years.
Tom's father was head groom to John Harrington, a wealthy sugar merchant. Tom loved horses and followed in his father's footsteps. One day, a ship from Africa unloaded on the docks and and two elephants were among the cargo.
No one had ever seen such incredible creatures, and they were disoriented and ill from their long sea journey. Harrington was a shrewd businessman, and after asking Tom if he though the elephants would live, purchased them from the ship's captain.
Tom takes to the elephants immediately and is eager to work with them. At first they were angry and wary of Tom, making several successful attempts to pick the locks of their crates to escape, but eventually they began to trust him.
He names them Timothy and Jenny, although is careful to not share this information with anyone else less they think he is mad. I also think by not sharing their names with anyone else, he keeps them from becoming attached to anyone else; they belong only to Tom.
Tom's relationship with the elephants sadly precludes normal relationships with humans, particularly women. He sleeps in the barn near the elephants, spends all his time with them, and when a lovely young lady named Lizzie wants to become closer to Tom, he spurns her. His responsibility is to the beautiful creatures whom he believes need him.
As the story progresses, the reader is privy to dialogue between Tom and Jenny. Is Jenny really speaking to Tom, or is this an example of Tom sliding into some sort of madness?
Not all goes well with Tom and the elephants, and the twists and turns of this tragic tale are masterfully told by Nicholson. The thought-provoking end to this magical story will be turned over in the mind of the reader for a long time, and I suspect people will either love the ending or hate it. I loved it.
Rating 4 stars of 5.

Posted by (Diane) bookchickdi at 5:19 PM