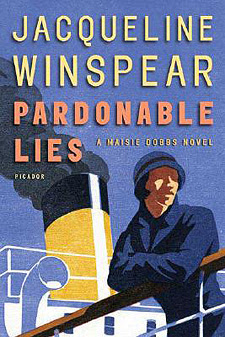 The third Maisie Dobbs novel, Pardonable Lies, is a bigger book, and delves more deeply into Maisie's past and her personal life. When a man asks Psychologist/Private Investigator Maisie Dobbs to help him fulfill a deathbed promise to his wife to find out if their son, who was declared killed during World War I was really dead, Maisie takes the case.

Coincidentally, Maisie's friend Priscilla has come for a visit and asks Maisie to find out the circumstances behind her brother Peter's wartime death in France. Maisie and Priscilla both served in France during the war, and Maisie was wounded in an incident that caused her boyfriend to become brain damaged. He now lives in a permanent vegetative state in a hospital.

All this shakes Maisie, and she reluctantly takes the cases, and heads back to France to face her demons. The scene where Maisie is in the cemetery where so many men lost their lives during the war is emotionally powerful, and reveals a new level of depth to Maisie. All the horrors of war come rushing back, and Maisie is overcome with emotion.

I think many people who have faced trauma will understand Maisie's experience. Maisie has been presented as a character so in control of her emotions, this incident makes her more vulnerable.

Wisnpear ratchets up the tension in this novel as it appears that someone is trying to kill Maisie. Who and why this is happening is a puzzle, as there is more than one suspect.

The title, Pardonable Lies, refers to a few things. Maisie and her mentor Dr. Maurice Blanche have a falling out when Maisie discovers that he hid from her some aspects of his intelligence work during the war. This rift is important, and I wonder if it will permanently affect their relationship.

Maisie is very scrupulous, and her integrity is paramount to her. When she discovers two secrets related to Priscilla's brother and her client's son, she has to decide which is more important- protecting someone or telling the truth. Her internal struggle makes for a powerful story.

I'm enjoying getting to better know Maisie through these novels. In this one, we see Maisie struggle more with her emotions, having to face her past. I liked her friendship with Priscilla, unique because Maisie doesn't seem to have many friends her own age.

I also like getting historical context. Following World War I, when ships were no longer needed for battle, many of them were converted for pleasure travel. Although the world financial depression hurt the economy, travel to the Riviera, Africa and the Mediterranean became cheaper and easier. This opened up the world to many people who hadn't traveled much before.

Pardonable Lies gives us a deeper look at Maisie's life and I found it the strongest of the series so far. This series would be great for high school girls, Maisie is a terrific role model.

Posted by (Diane) bookchickdi at 1:33 PM