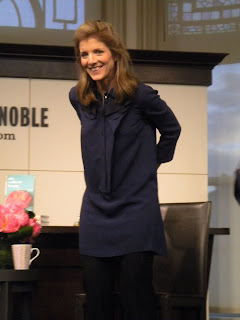 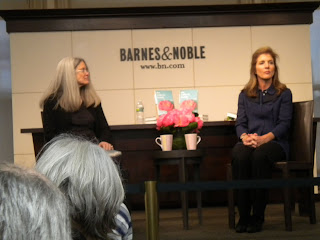 April is National Poetry Month, and to celebrate, Barnes & Noble Union Square hosted Caroline Kennedy, who discussed her book, She Walks in Beauty- A Woman's Journey Through Poems. Poet Sharon Olds, whose two poems Socks and High School Senior are in the anthology, discussed poetry with Ms. Kennedy.

The inspiration for the book came when, for her 50th birthday, three friends gave her poems. Kennedy was clearly touched by the gift, and thought that a collection of poems celebrating all of the different aspects of being a woman would make a great book.

Kennedy spoke of a renewed relevance for poetry. Poems are short and intense, and in today's communication of Twitter (140 characters) and text messages, people have become used to getting information in bite-sized pieces. She said that "poetry can be a way of creating community", and spoke of her work with an after-school poetry club in the New York City Public Schools.

She wanted "a book of poems for middle-aged women, a book that speaks of women's experiences through poems." She said there are many poems about love and solitude, not so many about friendship. Kennedy looked for "poems that turn ordinary moments into extraordinary ones."

Sections of the books include "Falling in Love", "Making Love" (which her children were not thrilled with), "Marriage", "Work" "Beauty, Clothes and Things of the World""Friendship" and "How to Live". Each section has poems that illustrate the chapter title, and features both poets familiar- Emily Dickinson, Walt Whitman, William Blake- and those new to the casual poetry reader, like Ellen Hagan, Rita Dove and Lucille Clifton.

Kennedy read W.H. Auden's Leap Before You Look, joking that it had special meaning for her following her ill-fated attempt at senatorial politics a few years ago.

Poet Sharon Olds also spoke of Auden's poem, saying that you could "feel the joy of music in his poem", and how much she liked that the repetition creates expectation and suspense.  She also read her own poem, High School Senior, written from the perspective of a mother whose daughter will soon be leaving the nest for college. It is readily identifiable for those of us moms who have experienced those same feelings.

I enjoyed the evening, although I think it may have been better to have an experienced moderator asking the questions of the women; at times, the program seemed to lack a little focus. It was nice to meet Kennedy, who signed copies of her book. I got to finally tell her that we have something in common- we both gave birth to our first-born children on the same day.

She Walks in Beauty- A Woman's Journey Through Poems is a lovely book, one that would make a wonderful gift for Mother's Day or a birthday. Kennedy's introduction to each chapter is insightful, and I liked the way the chapter headings follow a woman's actual journey through life.

Posted by (Diane) bookchickdi at 7:08 PM