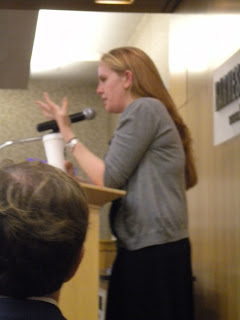 Molly Jong-Fast drew a standing only crowd at her book signing for The Social Climber's Handbook at the Upper East Side Barnes & Noble on April 27th.

Jong-Fast is the daughter of author Erica Jong, who sat beaming in the front row like the proud mama she is. The crowd was made up of many family and friends of Jong-Fast, as evidenced during the Q&A session, where she called on all the questioners by name. At one point, she called on someone and said "Hi- a person I don't know!" Then dejectedly, "Oh, I do know you."

Not only was Erica Jong in attendance, but author (and also a daughter of a literary lion) Susan Cheever asked the first question. Then singer Judy Collins walked in the door. I felt like I was a guest at a very chic Park Ave. party; how I got an invitation, I'm not quite sure.

The novel tells the story of Daisy Greenbaum, an Upper East Side socialite who turns to murder when her financial wizard husband is on the verge of losing his job, and therefore their comfortable lifestyle, following the beginnings of the financial meltdown.

It is a satire, and from what I have read so far, a wickedly funny one. Jong-Fast has a quick, cutting sense of humor, one I was introduced to when I began to follow her on Twitter. She is funny in person too, not just on the page.

When someone's cell phone rang in the front row, she asked if it was her stepfather's, and then warned all of us that if a cell phone rings, "I WILL say your name and talk about you."

The idea for the book came when she and her husband were at a school application meeting for their child that went on for over six hours. It was 2008, an when they went in the Dow was at 8000. When they left six hours later, it was at 7200. This gave Jong-Fast the seed of an idea for her book.

She read a scene from the book inspired by The Bonfire of the Vanities, one of her favorite books. The scene featured Daisy's husband walking their 8 year-old daughter to school and trying to explain to her exactly what it was he did for a living. The audience howled with laughter  of recognition at the description of his friend, a 60 year-old man walking his child from his third marriage to school down Park Ave.

Then she read a scene where Daisy kills someone because, "since she's actually a murderer, so I'll read a part where she murders. Because deep in her core, Daisy was a murderer in the best possible way."

When someone said that she'd done such a convincing job writing Daisy as a murderer, Jong-Fast said that she wrote it "cover up her own crimes." She also said that we'd be surprised at how much crime occurs in the Upper East Side, adding, "but not by me."

Erica Jong asked if Jong-Fast thought that satire could improve the world. She replied "I'd be really shocked if my book brought down the banking system, but if that helped sell books, then yes."

Jong-Fast says that she doesn't think of herself as of the upper class, as her protagonist Daisy is, but more as "the servant class, a journalist. Not a part of the society I satirize, but as an accessory."

It was delight to meet Jong-Fast, she's very down-to-earth, and someone you could enjoying dishing with over a long lunch. I can't wait to finish her book.