When I got there, there were already many eager Anne Lamott fans in line. Lamott fans are a special breed; they are kind and friendly and many people started conversations with people in line next to them. No one was cranky about waiting out in the cold.

Lamott began the program by reading from her new book, Help, Thanks, Wow: The Three Essential Prayers.  It is a slim book, all about the three prayers we say to God or our higher power: help the people we love who need it and help us to be better people; thanks for the many blessings we have and wow, expressing amazement at the many wonders, and sometimes awful things, we are surrounded by. 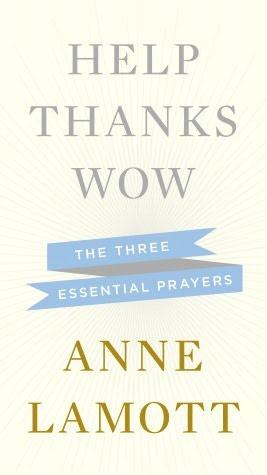 She spoke of her belief in science, which doesn't always coincide with her fellow Christians. She bemoaned the fact that Christians today are not identified as Dorothy Day and Thomas Merton, people who cared for the sick and the poor, who were great thinkers, but rather politicians like Sarah Palin and Mike Huckabee.

Lamott was dragged kicking and screaming into the world of Twitter and Facebook by her publisher, but once she was on them, she became a social media maven (even if she doesn't always know the lingo). The recent election was a treasure trove for Lamott, and she spoke eloquently about the debt that today's women owe the women before who had to fight for equal rights. It is our responsibility to not let their struggle fall by the wayside. (You can follow Lamott on Facebook here, and on Twitter here)


Author Gretchen Rubin (The Happiness Project) interviewed Lamott, and I (along with many others in the crowd) wished their conversation had gone on for many more hours. Lamott puts many of her family and friends in her books, and Rubin asked her if that was a problem for her, if she worried about what they thought, or if she "just let the chips fall where they may." The crowd roared with laughter when Lamott said "there is not an area of my life where I let the chips fall where they may. I worry about every chip."

She joked about her "raging OCD issues", her highly structured writing schedule, how much harder it is to write fiction than non-fiction, and how if you change a person's hair color and height, they will never recognize themselves as a character in your book.

Rubin asked one of my favorite questions, "What do you read?" and Lamott gave us quite an extensive list.


She has been working on her next book, As In Life, for a few years. Her editor Jake Morrissey interrupted her progress on that book to encourage her to write Help, Thanks, Wow, so we have another book to look forward to very soon.

I loved how Lamott closed by stating that for humans, there is "no owner's manual, we just care for each other." If you haven't read Lamott (her book Grace (Eventually): Thoughts on Faith is on my favorites bookshelf), give her a try. She writes fiction and non-fiction and her book Bird by Bird is a staple for anyone who wants to be a writer.