Confessions of Joan the Tall by Joan Cusack Handler 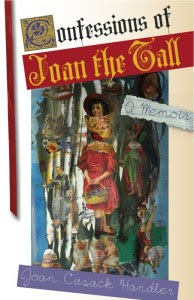 You don't have to be Catholic to enjoy Joan Cusack Handler's memoir, Confessions of Joan the Tall, but you do get a deeper level of understanding if you are.

Handler, a poet, chooses to write her memoir in the voice of Joan as an almost twelve-year-old girl, and it took me awhile to get used to that. I don't normally enjoy books written in the voice of children, but that conceit works very well for the book.

Joan has an older sister Catherine, an older brother Sonny, and a younger brother Jerry. Sonny physically and emotionally torments his siblings, with Joan getting the worst treatment. This is not just sibling rivalry, Sonny is a serious, scary bully. (Handler has said in this interview on her blog that the only sibling who has read her book is her sister.)

She is also dealing with the fact that at the age of 11 1/2, she is close to six feet tall, and that makes her the subject of ridicule in school. Her mother tries to make up for this torment by buying Joan beautiful clothes to wear, and the descriptions of her clothes are so vivid, I could picture them clearly in my mind. Her mother tells Joan that the others are jealous that Joan can wear clothes like a model.

Joan's mother tended to be cold and withholding, and sometimes beat the children with a belt, which was probably not uncommon in households in the 1950s when Joan was growing up. She idolized her father, a devout Catholic, and Joan tried desperately to live up to his high expectations.

The conflict between who she was and who she aspired to be led to physical ailments. Joan had bladder problems and developed colitis. A particularly bad case of boils is graphically described and sounded so   painful, it nearly made me cry.

Anyone raised in a Catholic household and who attended Catholic school in the 1950s will be able to relate to Joan's upbringing. The nuns who taught were tough, strict and sometimes cruel. The nuns who showed Joan kindness made quite an impression on her, like the one who helped her after Joan wet her pants in the classroom.

Handler perfectly captures the angst of being twelve; the uncertainty, the need to please your parents, the desire to fit in with other students and have friends, to be just like everybody else. The funny thing is, no one ever was like everybody else. Reading it brought all those feelings right back to me.

The language here is so beautiful, it is quite apparent that Handler is a poet. It is written as if it were journal entries, most entries being just a page. You feel as is you are reading Joan's actual journal, although Handler said she did not keep a journal as a child.

As I said, if you grew up Catholic and went to Catholic school, you will get so much more out this emotional book. Joan's struggle to be a good Catholic will resonate with many, as will her desire to be a good daughter.

This book is one that will appeal to people who came of age in the 1950s (Catholics in particular), but teenagers today will also relate to Joan's story. Some of the feelings of adolescence will never change, and a teen who feels outside of the norm (and that would be most) will empathize with Handler's story.

The cover of the book is visually stunning, and the title, Confessions of Joan the Tall, evokes the stories we read about saints in Catholic elementary school. This book would make a terrific gift for someone who grew up Catholic in the 1950s.

TLC Tours and Cavan Kerry Press are providing a copy of Confession of Joan the Tall to readers of this blog. You can enter in the comments section; be sure to leave your email address. The winner will be chosen on December 10th.

Thanks to TLC Tours for providing an opportunity to review this book. For other reviews of this book, visit the TLC website here.