Yesterday I attended the second Random House Open House in New York City. I went to the first one last December and enjoyed it so much, I was happy to see that they planned a second one.

One inventive thing they do at this Open House concerns their lunches. They create lunch sandwiches and wraps using recipes from Random House author's cookbooks. Such a clever idea! I chose the Roast Turkey Breast with Lemon and Sage Brown Butter from handsome chef Curtis Stone's book What's For Dinner? (I did not choose that because he is so hunky, I just really like turkey.) It was quite tasty.

Other options included a Hummus Veggie Wrap from Bobby Deen and Melissa Clark's book, From Mama's Table to Mine, a book filled with comfort food recipes at 350 calories or less, a BBQ Pulled Pork inspired by A Feast of Ice & Fire: The Official Game of Thrones Companion Cookbook and a Mexican Lentil Wrap from Lucy Danziger's Drop 10 Diet Cookbook, whom we saw at December's Open House.

There are recipe cards available from the books for the sandwiches, which I think is terrific. I picked these three. 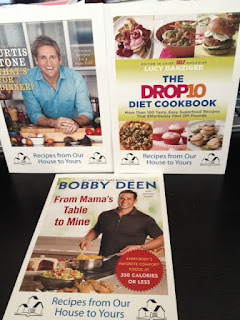 At the end of the sessions, there was a mixer with wine and a lovely dessert table that had many of us buzzing around it like bees on flowers. It was filled with cookies from Sara's Snackers, which I love. They had the Lemonade Cookies, Chipn'etzels, my favorite until I tasted the Dark Chocolate Drizzled Chipn'etzels. They are bite sized cookies with pretzels and potato chips inside and are too good for words.

They also had chocolate and butterscotch puddings from an upcoming cookbook Puddin' by Clio Goodman (October 2013), that was so smooth and creamy and delicious. Goodman owns a sweet shop in NYC. 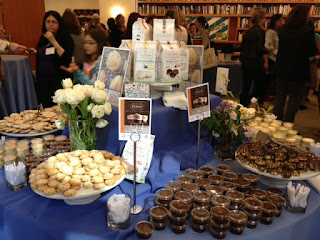 I will have a wrap-up of the Random House Open House as soon as I go through my copious amount of notes.

Posted by (Diane) bookchickdi at 9:55 AM