In The Land of the Living by Austin Ratner 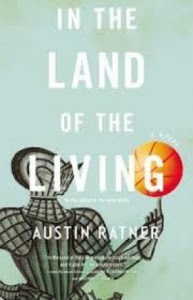 As I have mentioned before, I live in a household of all men (even our dog, Malcolm, was male). So I am always fascinated by novels that give me insight in the male psyche, like Khaled Hosseini's The Kite Runner.

Austin Ratner's novel, In the Land of the Living, tells the story of two generations- Isidore, the son of Russian Jewish immigrants fleeing the horrors of the pogrom, and his son Leo, an intelligent, hard-working man studying to be a doctor like his father.

Isidore lost his mother to illness when he was young, and his relationship with his father Ezer was troubled. Ezer could not work and raise his three young sons, so they spent time in a foster home. Isidore felt that his father was a bully and did not know how to raise his sons, and as he got older, their arguments became more violent.

Isidore accused his father of "employing a technique he'd presumably learned at the Kishinev School of Cossack Child Rearing" when Ezer hit his son Burt in the head with a pot. Ezer screamed at his son "Do not judge me, Isser! You know nothing! You're a child!"

Ezer has a point; he grew up in horrible poverty, his family chased from one hovel to another, the men and children beaten, the women raped. He left his homeland for a new start, and worked long, hard hours to make a better life for his own family. He felt his sons should be appreciative, his sons felt unloved by their father. No one understands the other.

Isidore is a smart man, and he works hard to get into college and then medical school. He puts distance between his family in Cleveland by going to college at Harvard, where his love of poetry is not looked down upon.

Back home in Cleveland he finds a mentor in Doc Neuwalder, a renowned surgeon and father to the lovely Laura, who is "very good at keeping people happy." Laura and Isidore fall in love, he becomes a doctor and they have two beautiful baby boys, Leo and Mack. Tragedy befalls the family, and Leo and Mack never get to know their father.

Leo wants to follow in his his father's footsteps as a doctor, to make him proud. But he is a lost soul, and his relationship with his younger brother Mack makes him his sad. Mack is a popular guys, has lots of friends, but Leo is not one of them, though he would like to be. It hurts Leo when Mack doesn't come to his high school graduation because he would rather be with his friends.

It is said that each child in a family is raised by different parents, meaning that each child has very different relationship with their parents than their siblings. In this case, it is more literal in that Mack didn't remember his father at all.

The last section of the book consists of a road trip, with Leo and Mack driving from California to Cleveland. Leo hopes that this trip will help his get his head straight and that he will gain some insight into his Mack. He really wants to have a relationship with his brother.

Leo writes a letter to his father, swearing to fulfill his promise, and become successful. He promises to be the "best there ever was" for his father, to make him proud. He vows to "fight on for you here in the land of the living with all the strength I have."

And that is what this book is all about- fighting to make it in the land of the living, through all of the struggles and tragedies that lie ahead.

The relationship between fathers and sons and brothers is explored with great intensity and deep insight in The Land of the Living. I highly recommend it.

Thanks to TLC Book Tours for allowing me to be a host on this tour. Other tour hosts are: