A Star For Mrs. Blake by April Smith 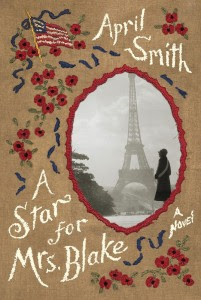 As a young child in the late 60s- early 70s, I can remember walking to school and passing by a house that had a gold star in the window. When I asked my mom what that meant, she told me that the woman who lived in that house lost a son in the war. It always made me sad thinking about that mom and her son.

April Smith's new historical novel, A Star For Mrs. Blake, tells the story of Cora Blake, a woman who lost her only son in battle in France during WWI. She has had a tough existence since then, losing her mother and sister, and moving in with her brother-in-law to care for him and his three daughters.

The Great Depression has hit the coastal rural area of Maine particularly hard, and Cora scrapes by working occasionally at a fish canning manufacturer, difficult dirty work that pays little. Her saving grace is volunteering at the local library, which would not be open if not for Cora. She has a beau, a geologist who wants to marry her.

An opportunity arises where certain Gold Star mothers whose sons were buried overseas can go to France to visit their sons' graves, located in a big military cemetery. Cora jumps at the chance and in her small group are Katie, an Irish working woman who lost two sons, Minnie, a Jewish woman, Wilhemina, whom they discover spent time in an asylum, and Bobbie, a wealthy Boston socialite.

Lt. Tom Hammond is their military escort, along with Lily, a young nurse from Chicago. The women, who come from such different places, do not always get along and have more than a few skirmishes. Along the way, Cora meets Griffin Reed, a war journalist who was severely injured in battle and now has a tin mask covering part of his face and a morphine addiction. (Anyone who has watched HBO's Boardwalk Empire will understand about the mask, worn by WWI vet Richard Harrow in the show.)

Cora and Griffin become friends, perhaps because they both are hiding behind a disguise- Reed behind his mask and Cora behind a lie she has been living with for many years. I liked the growing relationship between these two people.

The women are taken from place to place in France, and soon strafe living under the military rules they have been forced to follow. Seeing these women who, once away from their husbands and families, become stronger and bond together is satisfying and learning more about their home situations is interesting.

There are some secrets discovered along the way, and I admit that I found at least one incident at the end of the book a little too soap opera for my taste, but overall I really enjoyed this book. The mixing of politics and military is also an intriguing aspect of this book.

Reading books based on historical facts interest me, and in the acknowledgements Smith shares her real life inspirations for her fascinating book. I had never heard about these Gold Star mother pilgrimages and will be looking for more information on them.

Fans of Sarah Blake's The Postmistress and Laura Moriarty's The Chaperone (who also had a protagonist named Cora) will find much to like here, with women who, once away from home, find something in themselves they may not have known existed.

Thanks to TLC Tours for including me on this tour. The rest of April Smith's stops are here.