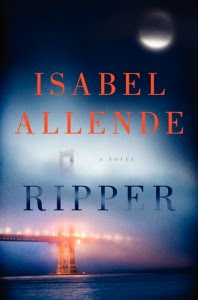 It's been many years since I first read and enjoyed an Isabel Allende novel. She is best known for magical realism in her literary novels, so I was surprised to find that she tried her hand at the mystery/thriller genre with her latest work, Ripper.

Ripper has a serial killer at work in San Francisco, but no one know it yet. Amanda, a high school senior at a nearby boarding school run by feminist nuns (very cool!), is kind of nerdy and smart and spends time with other smart, nerdy teens in an online role playing game called Ripper.

They are intrigued by an astrologer (and friend to Amanda's mother Indiana) who predicts a bloodbath of murders will take place in San Francisco, and when a high school security guard is found brutally murdered, they have their first case.

Amanda's father is a police detective, so Amanda tries to get information for her team from him. Amanda's grandfather (Indiana's father) Blake is part of team Ripper, and I loved his relationship with his granddaughter.  They love each other fiercely, and Blake spends as much time as he can with Amanda.

The story opens with Amanda telling us that her mother is being held by the serial killer, so we read the rest of the rest of the story waiting to find out why and how this happens. This conceit ratchets up the tension dramatically.

Other murders occur and the police don't believe they are connected until team Ripper puts all the pieces together. Amanda's father does not like his daughter's interest and involvement in these murders, but at least Blake is there to keep an eye on things.

Indiana Jackson is a holistic healer, a real crunchy-granola type. She is also knockout gorgeous and can get men to do whatever she asks, but she doesn't take advantage of that. She is in love with Alan Keller, who is from a wealthy family but doesn't like to work. Ryan, a former Navy SEAL who lost a leg in the war and now works for the CIA in some kind of clandestine manner, is a client of Indiana's. They are good friends, but he would like to be more than that.

As I was reading the story, I thought there were too many characters to keep track of- Indiana's many clients, the Ripper team, police, murder victims- it felt overwhelming. But as the story got rolling, I saw how everything came together and it worked.

Allende gives a few clues as to who the murderer may be, which I picked up on, but I had no idea how or why the murderer killed. The final resolution was a little hard to swallow, although the action scenes at the end were nail-biting.

The characters in the story are well-drawn and interesting, and I was particularly interested in Ryan's backstory. If the mystery's resolution stretches credulity a bit, I am willing to go with it because I liked the characters so much.

The book is translated from the Spanish by Ollie Brock and Frank Wynne, and they did a marvelous job. I would have never guessed that the author wasn't from San Francisco herself.

Thanks to TLC Tours for putting me on this tour. The rest of Isabel Allende's tour stops are here.