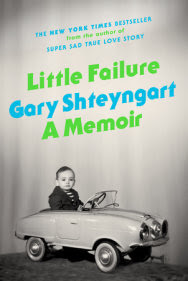 The Story: Shteyngart moved from Russia to Queens, New York with his parents in the late 1970s when he was seven years old. The author of three critically successful novels (The Russian Debutante's Handbook, Absurdistan, and Super Sad True Love Story) hits another bullseye with his account of a young childhood spent in Russia and then the adjustment of moving to America, a place he was taught was much inferior to his homeland. This is a humorous and moving account of being a sickly, only child, an outsider in Hebrew school, college life at Oberlin and working towards his goal of being a writer, all the while trying to get his father to believe he is not a "little failure", one of his father's nicknames for him.

Short & Sweet Review: I hadn't read any of Shteyngart's novels, but have seen his howlingly funny book trailers online. This is such a rich, funny book, and anyone who enjoys reading about the immigrant experience should put this on their TBR list. His vivid writing brings his childhood in Russia to life and his stories of his parents fighting (he always feared they would divorce), his grandmother's fierce devotion to him, his striving for acceptance from his new American classmates and how that led him to a life as a writer are fascinating.
I think Americans take for granted how many people want to come here to live, the sacrifices they make and how hard they work to fit in and build a good life for their families. Reading Little Failure will remind you of that.
Shteyngart's book is brutally honest in quest for acceptance from his classmates, his search for love in college, and his many missteps on the road to writing success. He lays himself out there for all to see. At the end of the book, he takes his parents back to Russia, and this section of the book is very moving.
Shteyngart is a brilliant writer, each sentence perfectly constructed to convey his idea. Even if you haven't read his fiction (like me), if you like the memoir genre and you like to laugh, this book is for you.

Posted by (Diane) bookchickdi at 3:53 PM