The Dismantling- by Brian DeLeeuw 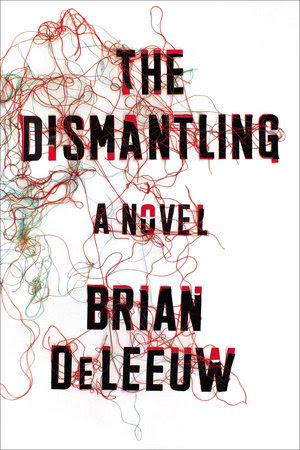 Brian DeLeeuw's novel The Dismantling has some topical elements in its plot- injuries suffered by NFL players, the lack of available organs for those needing a transplant- and combines them with a young man trying to come to terms with the loss of his younger sister years ago and a woman with a mysterious past into a fast-paced thriller that also makes you think.

We meet Simon, a twenty-five year-old man who has dropped out of medical school but has yet to tell his father. His friend hooks him up with a under-the-radar company that connects people who need kidney or liver transplants with people who are willing to sell them their body parts.

Simon lost his mother to a horrible death when he was just a young child, and his teenage sister died, the circumstances of which are unraveled during the story. We do know that Simon feels that her death was his fault, but we don't know why for a long time.

Simon is tasked by his boss to find a liver donor for Lenny Pellegrini, a retired NFL player with a drinking problem who suffers from too many hits to the head during his playing days. Lenny's friend Howard, also a former NFL player, is paying for the liver and he and Simon must convince Lenny to do this for his wife and two young children.

Through their website, Simon has found Maria, a single young mother willing to sell a piece of her liver to Lenny. Since it is illegal to sell organs for transplant, the woman is presented as a cousin of Lenny's, and she is flown in and coached as to how the process works.

Maria seems like the perfect candidate, but things start to unravel shortly after the transplant. Maria disappears and Lenny is still in a state of severe depression. Simon's boss threatens him that he better fix this situation before too many questions are asked.

The Dismantling is a fast read, one that you want to finish in one sitting while at the same time taking time to ponder all of the bigger issues here. At its heart, it is Simon's story, about his coming to terms with everything in his life, where he has been and where he is going.

While Simon is in medical school, he has to participate in autopsying a cadaver, and the scenes set there are vivid and not for those with weak stomachs. It is in these sessions that Simon's past comes back to haunt him, and he ends up in the dangerous situation he finds himself in.

Simon is an interesting character, and his relationship with his dad was so real and heartbreaking. The Dismantling combines a thought provoking story with some heart-stopping action scenes and twists and turns, and seems tailor-made for a movie, maybe for a Hemsworth brother. I also enjoyed the New York City setting, especially since Simon and I lived on the same street.

Thanks to TLC Tours for putting me on Brian's tour. The rest of the tour stops are here: