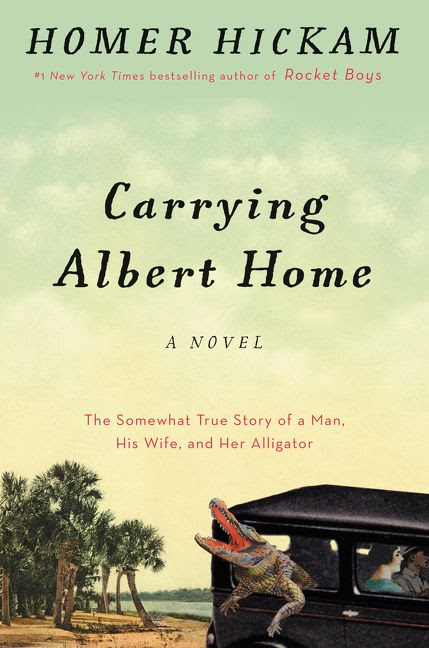 Carrying Albert Home: The Somewhat True Story of a a Man, His Wife and Her Alligator tells the story of Homer Hickam's parents, Homer and Elsie, and their journey from West Virginia to Florida with their alligator Albert during the Great Depression.

Young Homer is watching his favorite TV show, Davy Crockett, when his mother walks in the room and says "I know him. He gave me Albert.", pointing at actor Buddy Ebsen on the television. Homer is flabbergasted that his mother actually knows someone on TV and when she tells him that Albert was an alligator, Homer is even more confused. Elsie tells him that she will tell him the whole story, but not now.

The story of Albert is doled out to Homer over many years. Elsie had been living in Orlando, Florida, where she met a young Buddy Ebsen and fell in love. They dated and then Ebsen moved to New York to try and make it as a dancer and actor.

Elsie moved back home to West Virginia, married Homer Hickam and became the wife of a coal miner, something she did not want to be. Buddy Ebsen sent Elsie a wedding gift- a baby alligator she named Albert.

Albert became her best friend, and she treated him as if he were her child. After four years, Albert became too big and when he chased her husband into the yard without his pants, Homer told her Albert had to go.

Elsie reluctantly agreed, but only if they would drive Albert back to Orlando to release him. Homer loved his wife, although he believed that she was still in love with Buddy Ebsen, and he wanted to make her happy, so he agreed.

On their way from West Virginia to Florida, with Albert lying in a tub in the backseat and a rooster who tagged along, the foursome made their way down the coast. The adventures that awaited them would have made Forrest Gump proud.

They found themselves in the middle of a bank robbery (that Albert foiled), met author John Steinbeck, got involved with a coal miners strike, kidnapped by bootleggers, Homer played baseball while Elsie became a nurse to a wealthy man, they acted in a Tarzan movie, and they met Ernest Hemingway during a terrible hurricane. And at each turn, two bad men, Slick and Huddie, kept humorously turning up like bad pennies.

At least these are the stories they told their son Homer Jr. through the years. The stories are fascinating and funny, but the most interesting part of the story is the marriage of Elsie and Homer Sr.

Homer tried his best to make his capricious wife happy, but Elsie always seemed to want something more, some new adventure that he found himself dragged into. Elsie was very unhappy, she "always felt that her life was like a jigsaw puzzle with no picture on the box to show her how the puzzle pieces should fit together."

All Homer wanted to was be a coal miner and good husband, but he had a difficult time competing for his wife's affections with a movie star. And Elsie wanted to be anything but a coal miner's wife, yet there she was.

Hickam does a wonderful job with these characters, and we feel their pain. Marriage isn't always easy, especially when the spouses appear to want different things in life.

I tore through Carrying Albert Home, and it felt like a 1940's movie you might find on the Turner Classic Movies channel, or maybe a Saturday matinee serial that you would return week after week to see what would happen to Homer, Elsie and Albert next.

I'm sure young Homer wondered over the years what stories were true, which ones were exaggerated, and which ones were just plain fiction, but it doesn't really matter. Carrying Albert Home is such an enjoyable, crazy journey, and that is all the truth the reader needs to know. I highly recommend it.

Thanks to TLC Tours for putting me on Homer Hickam's tour. The rest of Homer's stops are here: