On Broadway- The King and I 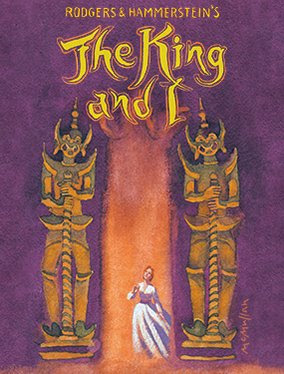 You know you are in for something special in the new Broadway production of The King and I as it opens as a huge ship moves along the stage and out into the audience.

Kelli O'Hara has finally won a Tony for her role as Anna, the English widow who brings her son to Siam when she takes a job as a teacher to the King of Siam's many children in the 1860s. O'Hara is simply stunning as Anna, letting us see how steely Anna must be to hold her own in a land where women are relegated to an inferior role.

Jose Llana played the King in the performance I saw (the role has seen two Kings since he departed), and he did a masterful job in a very demanding and dialogue-heavy role. He and O'Hara had a wonderful chemistry, especially in the audience pleasing song and dance of "Shall We Dance?", one of the highlights of the show.

I'd never seen the show, and was so impressed with this glorious production. Everything from the sets to the costumes to the music and choreography were perfectly done.

The young actors who play the King's children are delightful, and O'Hara clearly enjoys her scenes with them. Her interactions with the wives is interesting too. As hard as it seems, Ruthie Ann Miles steals the scene from O'Hara as she leaves the audience breathless when she sings "Something Wonderful". She received a standing ovation in the middle of the show for it.

It is a very long show, but you are so absorbed in this amazing production, you will jump to your feet at the end of the show to applaud this pitch-perfect production. The King and I is a show worth seeing, even if you have to pay full price for a ticket. You will get you money's worth.

More information about the show is here.