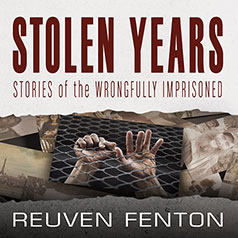 One of the few areas of agreement in a contentious Congress is the need to reform the criminal justice system. Lawmakers on both sides of the aisle agree that many people are incarcerated for far too long for minor offenses, such as marijuana possession, and that this is an issue that can be fixed.

This interest makes Reuven Fenton's book, Stolen Years- Stories of the Wrongly Imprisoned a topical book, and hopefully one that will be the beneficiary of this new scrutiny. Fenton, a reporter for The New York Post, has written about ten people who were falsely convicted and spent many years in prison before having their convictions overturned and winning their freedom.

While reading these stories, it is hard to fathom how so many people can fall through the cracks of the justice system. Whether through incompetence or malfeasance on the part of police and lawyers, innocent people's lives are destroyed and guilty people get away with crimes, allowing them to hurt other people.

Many of these stories have similarities; someone is brought in for questioning, and knowing that they are innocent, agree to speak with the police without a lawyer present. They are kept for hours in a room, barraged with questions, and told that if they just tell them the truth and confess, the police will work with them and they can go home.

Once they sign a confession, filled in with details by the police, the person is charged with the crime and their signed confession is used to convict them of a crime they did not commit.

They still can't believe that they could possibly be convicted of something they didn't do, and yet they find themselves in prison. Many of them spend their time working on their appeals, believing that they can find a way out.

One of the more interesting aspects of the book is the description of prison life. In the notorious Angola Prison in Louisiana, Damon Thibodeaux was shocked to discover that their are public tours of the prison, where people look at the inmates like they are animals in a zoo.

James Klupperberg was sentenced to Menard Correctional Center in southern Illinois, where he found that the inmates literally ran the prison, before the reforms of 1996 ended that practice. He described it as a "little city", where drugs were sold openly while people hung out on their corner, just like on the streets outside. (Think: TV's "The Wire")

The guys at the top of the chain of command had luxuries inside their cells- VCRs, portable washers, and stereos. Drugs were regularly smuggled into the prison, often by corrections officers. One enterprising person hit golf balls full of cocaine over the prison walls from the outside.

When they finally do get out of prison, the people who showed them kindness were often the correction officers. Many of them were happy to see these people get their justice and a chance to start a new life.

Another interesting theme of the book was what happened to these people when they were released after 15 years or more inside. The world had changed dramatically, and they faced many challenges, like finding employment. Even though their convictions were overturned, try explaining a 15-year employment gap on a job application.

The first meal outside of prison is very important, and we get descriptions of that. Many of them find it difficult to sleep in a soft bed when they get home.

Reading about a man falsely accused by his own daughter of rape, or a woman who lost her children when she was falsely imprisoned for killing her husband is heartbreaking. To be accused by someone you don't even know is bad enough, but to have family members turn against you is just unfathomable.

Anyone with interest in the justice system, and fans of the movie The Shawshank Redemption (which is everyone, right?) will want to read Stolen Years. It is enlightening and I recommend it.

Thanks to TLC Tours for putting me on Reuven Fenton's tour. The rest of his tour stops are here: