I'lll Take You There by Wally Lamb 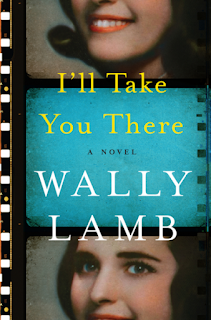 Wally Lamb is a writer who grabs the reader emotionally, taking them on a heartfelt journey in each book that he writes. I first discovered him in She's Come Undone, which I read at work. I cried so hard, people would stop by and ask me if I was OK. That's the kind of writer he is.

When I began his latest novel, I'll Take You There, I got a different kind of vibe, a lighter tone. Felix Funicello, cousin of 1960's star Annette Funicello, is a divorced dad of Aliza, a young woman working as a writer for New York magazine.

I loved the interplay between Aliza and her dad. Felix teases Aliza about her coarse language (an unfortunate side effect of living in NYC) and is supportive and encouraging in her career. Kat, Aliza's mom and Felix's ex-wife, is a strident feminist, and Felix and Kat still get along well even though they are divorced.

Felix runs a Monday movie night club at a old theatre that used be a vaudeville theatre. He has heard talk of ghosts that inhabit the place, but hadn't seen any until one day he is accosted by the ghost of Lois Weber, who made her name as a female director of films of the silent era. Lois tells Felix that she is going to show him a film of his life, starting when he was ten years old.

Felix actually enters the film and he becomes the young boy he once was. We meet his older sisters, Simone and Frances, as they are going to the theatre to see a movie. We learn about Felix's family and their relationships to each other.

The story deepens midway, when Frances faces some issues that she has been unable to deal with. The entire family is affected by Frances's problems, and the children learn some secrets that threaten the family's cohesion.

I grew to love I'll Take You There. I enjoyed the nostalgic look back at 1950's Brooklyn, and the history lesson of the Miss Rheingold beer competition that the Funicello children became personally involved in when their former babysitter was a finalist.

Lamb tugs at the heartstrings of the reader in the latter half of the story, with a tale that brought tears to my eyes. (Damn you Wally Lamb, you did it again!) The Funicello family worms their way into your heart and you love and identify with them. (Fans of TV's wonderful new show This Is Us would love I'll Take You There. It has a similar sensibility and blend of humor and pathos.)

Aliza is given the task of writing about the Miss Rheingold competition, which galls her since she was a Feminist Studies major in college. But she learns something interesting, and Lamb ends the novel with a blog post written by Aliza to her mom about the new generation of feminists that will particularly enlighten feminists of my age who may not quite recognize the feminists of today.

I'll Take You There features a grown-up Felix, whom we first met as a young boy in Lamb's sweet Christmas novel Wishin' and Hopin', and while you don't have to have read that book to appreciate this one, those who have read it will enjoy it on a higher level. I highly recommend I'll Take You There, and it would make a great gift for the literary feminist on your list.

Thanks to TLC Tours for putting me on Wally Lamb's tour. the rest of his stops are here: