The Sleepwalker by Chris Bohjalian 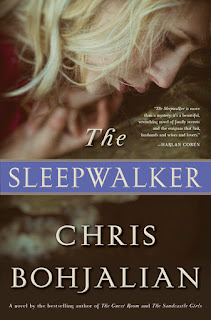 Chris Bohjalian chooses fascinating topics for his novels, and then pulls the reader into these worlds that one gets lost in for a few hours. His 2012 novel, The Sandcastle Girls,  about the 1915 Armenian genocide in Syria, a story that sadly resonates too much today, is a novel I frequently recommend to shoppers at the Book Cellar where I volunteer.

A Light In The Ruins takes us to Italy during WWII, with a family caught up in the crosshairs of war.  His novels set in contemporary times, like the brilliant The Double Bind, which deals with a young woman violently attacked on bike ride, and The Guest Room, about a bachelor party host who gets involved with a young woman forced into sexual slavery, have twists that leave you gasping.

Bohjalian's newest novel, The Sleepwalker, takes on a topic not frequently dealt with in fiction. A woman prone to sleepwalking disappears from her home while her husband is out of town. Her two daughters, college-aged Lianna and 12-year-old swimmer Paige, were home that evening and heard nothing.

As searchers look for Annalee Ahlberg's body in the nearby river, we slowly find out more about her life. She only sleepwalks when her husband is out-of-town, but why that is remains a mystery. The girls, particularly Lianna, feel guilty about what happened.

The Ahlberg family is falling apart. Dad Warren retreats into his job as a professor at the local college and drinks himself into oblivion at night. Lianna takes a leave of absence from college, smokes weed all day, and gets side jobs as a magician while caring for her sister Paige.

One of the police officers on the investigation becomes involved with Lianna. She discovers that he and her mother met at a clinic that deals with sleep disorders and they became a kind of two-person support group. But was that all they were to each other?

The Sleepwalker has a very eerie quality to it, and as Bohjalian slowly unwinds more information about Annalee's disorder and her relationship with her husband and the cop, an uneasy feeling overcomes the reader.

There is a shocking twist at the end, but upon reflection, Bohjalian gives a few clues that could be picked up on by a careful reader. The Sleepwalker would make a fabulous movie, as it has a very cinematic element to it. The characters are intriguing, the story moves briskly, and watching this family fall apart is heartbreaking.

I highly recommend The Sleepwalker, both for fans of mysteries and of family stories. If you read Celeste Ng's Everything I Never Told You, you'll want to put The Sleepwalker on your list.